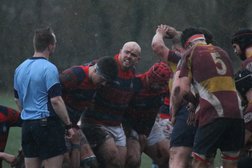 Blues make their 4th and final visit to Kent this season.

With Storm Jorge sweeping across the country, Chichester made the long journey north to play Dartfordians. The ground staff should be congratulated on their efforts to ensure the fixture took place with the application of sand making the going soft, heavy in places.

Chichester made 6 changes to the team that drew at home to Medway, last time out. Richard Ives and Ben Polhill came into the pack, Matt McLagan and Gareth Davies returned in the backs with Tom Knight and George Booth, making his 1st XV debut, on the bench.

In bright conditions, with a stiff breeze in their faces, Dartfordians kicked off up the slope. A Chichester attack was stopped illegally and Tom Blewitt kicked to the corner for a lineout on the 5m line. The ball was worked across the field and at the breakdown an infringement saw the referee produce a yellow card, reducing Dartfordians to 14 players. The penalty was kicked into touch and from the lineout the pack drove over the line with Chris Johnson dotting down. Converted by Tom Blewitt. 0 - 7. Still a man down, Dartfordians infringed close to their 22 metre line allowing Blewitt to put another kick into touch close to the corner. Blues reprised their lineout play and this time it was Harry Seaman on hand to apply downward pressure. Conversion missed. 0 - 12. Dartfordians were attempting to run the ball at every opportunity and finally found a way through the Chichester defence to get on the scoreboard. Conversion missed. 5 - 12. In the final moments of the first half a scrum 10 metres out provided Chichester with an attacking opportunity. Good work from Blewitt, Seaman and Baz Magda saw the ball advanced to the try line for Nick Blount to drive over for a third try. Converted by Blewitt. 5 - 19.

Half time. 5 - 19 and the Chichester faithful confident that a bonus point win was on the cards.

Blues kicked off up the slope into a stiffening wind. With only 2 minutes played the referee produced his yellow card and this time it was Chichester who were a man down. The Blues defence held firm for several minutes until finally Dartfordians found a gap and scored out wide. Conversion missed. 10 - 19 after 50 minutes. Both teams looked dangerous with the ball in hand as their backs probed for a gap in the opposition defence. Scoring opportunities went begging for both sides, with Dartfordians’ handling letting them down at crucial moments and Chichester being penalised repeatedly at the breakdown. On 61 minutes Dartfordians crossed the whitewash for a third time. Converted. 17 - 19. As the clock ticked down Dartfordians were becoming more dominant in the scrum and things were looking ominous for the visitors. With less than 4 minutes left, and with sleet driving down the pitch, the Dartfordians pack drove over the line for a bonus point try and the lead. Conversion missed. 22 - 19. With the weather deteriorating there was relief amongst the supporters and players alike when the Dartfordians fly half kicked the ball into touch to end the match.

Chichester’s next match is on Saturday, 21st of March when they welcome Thurrock to Oaklands Park. Kick-off is at 14:30.