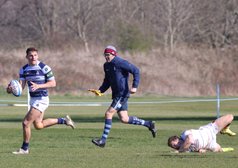 After their 22 - 12 victory over KCS Old Boys, in the driving rain back in October, Chichester travelled up the A3 on Saturday afternoon for the rearranged return fixture. Blues made 10 changes to the team that lost to Guildford at Oaklands Park last weekend. Tom Bowman and 1st XV debutants Stee Vasuturaga, Seamus McCormack and Dan Heriot came into the forwards, Sonny Tagitumu (also making his 1st XV debut), Charlie Norton, James Smith, and Pat Bray joined the backs with Tom Polhill and Jack Knight on the bench. On a sunny afternoon, in south west London, a bitterly cold wind swept across the pitch.

Rhys Thompson kicked off into the wind but the ball was returned and Blues soon found themselves under pressure and penned back in their own half. With KCS dominating the early scrums, and despite some spirited defending from Blues, it took only 9 minutes for the hosts to open the scoring with a try out wide. Conversion missed. 5 - 0. From the restart both teams exchanged kicks before Thompson broke a tackle and chipped over the defence with the KCS full back winning the foot race and clearing his lines. After 20 minutes, a clearance kick from KCS found touch 7 metres from the Blues’ try line. KCS infringed at the lineout and Charlie Norton’s monster penalty kick found touch, 60 metres up the pitch. Ben Polhill secured the ball at the lineout and after a couple of pick and goes Tyrese Makasi broke free and charged 20 metres towards the try line, before being stopped. Matt McLagan, playing at scrum half, fed Thompson who offloaded to Tom Bowman but he was tackled just short. The forwards inched the ball forward and it was Will Norton who broke through the KCS defence to dot down. Converted by Charlie Norton. 5 - 7. Having exchanged kicks from the restart, Jack Knight, on as a replacement for the injured Thompson, threaded a deft grubber kick through the KCS defence for the Blues’ backs to chase. Penalty conceded within kicking range for Charlie Norton. 5 - 10 and 24 minutes gone. With 7 minutes left in the half, Seamus McCormack picked up the ball from the back of the scrum, on the halfway line, and carried the ball 30 metres, before Makasi took over to move it within 5 metres of the try line before being stopped. However, 17 year old McCormack was on hand to burst through and dot down for the try on his 1st XV debut. Conversion missed. 5 - 15. From the restart, KCS recovered the ball and ran it in under the posts. Converted. 12 - 17. Half time and a fairly even contest.

KCS started the second half as they had started the first and it took them only 6 minutes to score in the corner. Conversion missed. 17 - 15. After the frenetic start, the game settled down with both teams enjoying possession they were unable to convert into points. On 57 minutes, an accidental clash of heads saw Blues shown a yellow card but they weathered the 10 minutes without conceding. With Blues back at full strength a KCS infringement provided Charlie Norton with a long range penalty attempt, just inside the halfway line. Converted. 17 - 18. After a great defensive effort in the red zone it was Blues’ turn to concede a penalty. Converted 20 - 18 and less than 5 minutes left. Blues’ restart didn’t go 10 metres but they turned over the scrum on halfway and once again it was McCormack who picked up the ball and carried it 35 metres towards the try line, before being stopped. The pack arrived in numbers, moved the ball forward and it was 18 year old Dan Heriot, also making his 1st XV debut, who dotted down under the posts. Converted by Charlie Norton. 20 - 25. With 3 minutes left KCS threw the kitchen sink at Chichester and were awarded a penalty on the 5 metre line. The hosts went for the tap and go, Blues defended valiantly but were unable to stop KCS crossing the try line. Conversion missed. 25 - 25 and full time.

Blues will have been disappointed not to have won the game but, on reflection, a draw was a fair result after a thoroughly entertaining 80 minutes of rugby. Despite the 10 changes in personnel, which included four 1st XV debutants and 3 Colts, this was a superb team effort and the 2 points tightens up mid-table in London 1 South, with 4 games left.

Man of the Match was Seamus McCormack.

On Saturday, Blues are on the road again when they travel to Sunbury-on-Thames to play London Irish. Kick off is at 15:00