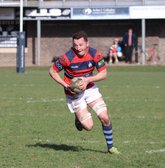 On a sunny day and good pitch, this was a close and interesting match with a clash of styles. As it turned out, Chichester lost because they conceded two converted tries in 7 minutes either side of half time after they had been in the lead. This changed the score from 12 - 7 to 12 - 21. An efficient Guildford (Gs) team managed to maintain a 9 points difference by the end of the contest, much to the disappointment of home supporters. The Gs displayed closely combined play between forwards and backs which made them a constant threat on the counter attack. Chichester mainly relied on exciting individual breaks but they needed to have more support on shoulders. The final margin was 5 tries and 4 conversions to 4 tries and two conversions. Blues earned a league bonus point for their tries.

Chichester had to make the usual many changes due to injuries and unavailability. At scrum half, 17 years old former Colt Charlie Manger made his debut and was to show his smooth passing ability. In their changed strip, they started brightly and attacked. After a lineout at Vultures corner, the pack rucked and moved over the line for veteran Jon Lindsay to press down. Converted by full back Ben Heber. 7 - 0. Fly half Rhys Thompson kicked strongly towards the right corner but a chance was spoilt by a knock on. Gs moved out and a rolling maul for 20 metres was impressive. Thompson then made a break but Gs responded and they also missed a try with a mistake near the right corner. Winger Ross Miller charged 40 metres into the Gs 22, taken on by others but another pass knocked on. Gs pressed, a catch and drive from the lineout and a try scored near the posts. Converted. 7 - 7. Chchester’s reply was a brilliant try by Thompson, who burst through, kicked over the top, regathered and won a race to the line. Conversion drifted wide. 12 - 7. The referee was allowing several minutes of injury time when Gs had an uncontested scrum due to front row injuries. 15 metres out, Blues lost the plot, did not cover the blind side, and a Gs back rower ran an almost clear path to touch down at the left flag. An excellent conversion. 12 - 14 at the break.

Gs attacked from the restart and scored after 3 minutes when Blues tried to run out of defence and the ball was stolen. Converted. 12 - 21. Play see-sawed before fast passes by the Chichester backs sent Matt McLagan haring up the left wing. He managed to offload at a final tackle but the supporting Charlie Wallace was forced out luckily for Gs. Reward came when, after two phases, the scrum pushed hard to the Gs’ line and the lively Tyrese Makesi got the try. Converted by Heber. 17 - 21. Gs gradually imposed themselves once more and their close passing gained a lot of territory. Their full back and left winger were fast and elusive in counter attacks and their forwards tight-knit. They scored twice more when they stretched the Blues’ defence on both sides to produce the gaps. One of these was converted. 17 - 33. However, Chichester do not give up and they raced to the other end. The ball was spun right and, after several phases, outside centre Ben Robson just managed to get over for a consolation try and the bonus point. Converted by Heber. Final score 24 - 33.

On reflection Gs deserved their win but Chichester put up a good fight, tackled hard, and things were equal in the tight despite their selection problems. They did, however, give too many penalties away under the eye of a strict referee, especially at ground level. Next week an away game at KCS Old Boys who play at Motspur Park.