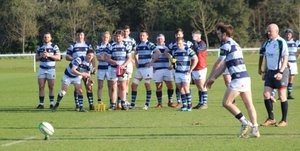 After their trip to south west London last weekend, Chichester were back on the road on Saturday afternoon heading for Sunbury-On-Thames and the return fixture with London Irish. Blues made 9 changes to the team that drew 25 - 25 with KCS Old Boys. Josh Cameron, Ben Deavall, Jon Lindsay and Zac Conley came into the forwards, Ciaran Johnston, Cam Hopkins and Ben Robson joined the backs with Harry Shonk and Ray Farr on the bench. Despite the blue skies and spring sunshine, in west London, a deceptively cold wind swept across the pitch. Kick off was delayed by 50 minutes with the referee caught in traffic, after a serious accident closed the M23.

London Irish kicked off with the wind at their backs and immediately had Chichester under pressure on the 5 metre line. Blues turned the ball over forcing an Irish infringement, allowing Jack Knight to kick for touch. From the lineout Zac Conley broke free from the maul, made 10 metres and off loaded to Jon Lindsay who passed out to Matt McLagan, but the Irish defence arrived in numbers and turned the ball over. The clearance kick was taken by Cam Hopkins who jinked through the opposition defenders, making 50 metres but his pass, to beat the Irish full back, was judged to be forward. After an energetic start from the hosts the game settled down and play ebbed and flowed with both teams squandering chances on the 5 metre line. After 24 minutes Chichester knocked on in the Irish half. Blues’ pack drove forward at the scrum and the ball went loose but at the third attempt it was the Irish winger who picked it up, looped around the Blues backs to run in under the posts. Converted. 7 - 0. It took Chichester 8 minutes to respond after an Irish infringement. The penalty was kicked into touch 18 metres out and from the lineout Tom Bowman drove forward but was stopped 5 metres short. Pick and goes from Ben Deavall, Charlie Wallace and Harry Shonks advanced the ball and it was Deavall who dotted down for the try out wide. Conversion missed. 7 - 5. As the clock ran down, Irish conceded 3 quick penalties allowing Chichester to advance up the pitch with a knock on giving Chichester a scrum 10 metres out. Deavall gathered the ball and drove forward, off loading to Charlie Norton who was stopped just short but, after 3 pick and goes, Jack Knight pierced the Irish defence. Converted by Norton.

7 - 12 and half time with Blues seemingly in control.

Irish started the second half as energetically as the first and only great counter rucking from Jon Lindsay and 2 try saving tackles from Pat Bray stopped the hosts from taking the lead. However, after weathering the early storm Blues were once again in control with Wallace and Tyrese Makasi carrying the ball strongly in attack. With 20 minutes left Irish conceded a penalty on their 22 metre line and Knight’s kick found touch 10 metres out. Conley received the ball at the lineout and Blues’ pack mauled forward with Lindsay breaking free to cross the line for the third try. Converted by Norton. 7 - 19. With the Chichester faithful expecting a bonus point try, Blues pressed the self destruct button and the invigorated Irish backs ran in a simple try out wide. Conversion missed. 12 - 19 and 11 minutes left. Irish upped the tempo and advanced the ball into the Blues’ red zone but any relief for Chichester was short lived as the hosts kept pressing. After some last ditch defending Blues conceded a penalty on the 5 metre line and the Chichester pack, which had been dominant all afternoon, was pushed back and Irish scored a third try. Conversion missed. 17 - 19 with the referee blowing for full time.

Blues will be disappointed not to have left west London with 5 points, having been in control for 70 minutes. However, the 4 points lifts them up to 6th in London 1 South with 3 games left.

Man of the Match was John Lindsay.

On Saturday, Blues are back on the road again when they return to London to play Battersea Ironsides. Kick off is at 15:00