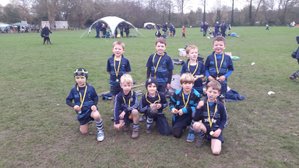 Spitfires Undefeated in Winchester Sterling performance from the Hurricanes.

Congratulations to all players who travelled to Winchester today. All played with energy and determination in what was a long and tiring tournament which had both teams play 5 games over 4 hours. I was really encouraged with how the two teams progressed and the positive attitude of the players in all matches.

Spitfires were undefeated in their pool, not a significant result considering the strength of the teams. Spitfires group of players (Fred Huggett, Jonty Briscoe, Connor Richards and Ben Ungermand "clicked" well together from the start; working well as a team. Ultimately they won four and drew one game. The final game was won by 9 tries to 8, against a Winchester teams which fielded their A Team!

Hurricanes progressed really well through the tournament. Adam King and Oliver Davies showed good leadership throughout in organising the defensive line and some strong runs from Eddie Harris, Thomas Carruthers and Harry Barden. Although they lost 4 games and drew one this does not do their performances any justice. I am proud of them for their perseverance and particularly for their positiver attitude and good sportsmanship. Well done guys!

The combined results of both teams put Chichester in 4th place overall and I am delighted wth that for two mixed teams.

Thanks to all parents for their support and help today, particularly with erecting the shelter, could've gone so wrong without you!