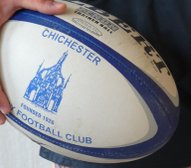 A belting day of Rugby!

An U7s Team were on the road early on Saturday making their way up to South West London to play in a Saracens Tournament at Richmond College. Following the tournament all teams had tickets to the London Premiership Double Header Fixtures at Twickenham Stadium. An exciting prospect on its own, with an added incentive for the tournament teams to play on the hallowed turf of Twickenham itself at half time, should they play well.

All Chichester players did really well and both coaches and parents were impressed with how they played and how they improved. The final results were: won 2, drew one and lost one. The loss was a high scoring, narrow defeat to the eventual winners, Tring: A well drilled and athletic side. Although the results placed them second in their group, the runner up, to progress onto the Twickenham pitch, was judged to be the team that conceded the least number of tries. This resulted in the forth team in the group progressing, which was disappointing for Chi and the organisers admitted was not a mechanism they would use again!

Collectively the Chi team is very good in attack: evasive running into space by all boys is a real strength. Individually; Charlie Stevenson consistently shows his pace and ability to beat the first tackler. Jonty Briscoe showed much improved determination in tackling and a good try count. Jude Smith is becoming known for his brave and determined tackling. Ewan Edwards' side stepping and balanced running were a real offensive strength, Harrison Janowski was dependable throughout and supporting every attack enthusiastically and Ben Ungermand, shows good spacial awareness and a strong desire and determination to win! Defensively we can improve and we need to work harder to pressurise the attacking team by moving forward together in a defensive line and being more accurate in ripping off Tag belts. This will help us to win "turn over ball", get the ball back and into regain the attack quickly.

The attitude and sportsmanship of all the team was again of particular note. The lead coach was approached twice by the Referee to say what a loverly bunch of boys and how impressed he was with their sportsmanship! Praise indeed and an important part of this great game.