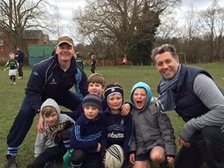 Swordfish undefeated and win their group.

Chichester U7s took 2 x mixed teams to the Winchester "A" Festival today and both had belting days at the office! They came 2nd overall in the combined result with Swordfish winning their group.

The tournament was billed as a tough tournament with the strongest teams in the area invited. Swordfish were unbeaten; drawing one and winning the remaining four matches. Spitfires won 2, lost 2 and drew 1. Overall Swordfish won their group which is the first tournament we've won our pool; particularly impressive considering the opposition. Spitfires came 3rd in their group. Those results combined to make a very impressive 2nd overall position in the Tournament for the Chi U7s.

All were tight games, with winning margins no more than 2 tries proving that winning turn overs was key. In attack both teams were very difficult to handle; with strong and straight running from "first receivers" gaining ground and the tries being finished off with with some cracking support running. Some support runs were timed to perfection, with players running onto passes even on the 2nd and 3rd phases of play. This is a big step up for us and very pleasing to see. Winning turn overs by pressurising the opposition through collective defence did improve throughout but remains an area to work on. There were however some outstanding individual tackling in difficult conditions for small cold hands to grip tags.

The enthusiasm and concentration of the players was impressive in what was a cold and a long tournament. The improvements in the teams was obvious and good to see the players putting into practice that which they'd practised in training.

Well done all, a belting day of Rugby.