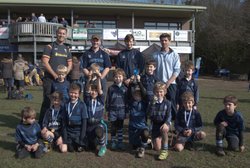 Today was a fantastic Day of Rugby in the Sunshine at Oaklands Park.

Today was a fantastic day of Rugby in the sunshine at Oaklands Park. Ending very successfully with a large haul of trophies for the club. All three age groups who entered the West Sussex Regional tournament won their age groups. Swordfish, for the U7s, won their pool and went on to play Pulborough in the final and won!

Swordfish played exceptionally well, showed great resilience to play consistently throughout a long day. Swordfish players included Ben Ungermand, Ewan Edwards, Thomas Dempsey, Fred Huggett, and Jonty Briscoe, commiseration to Charlie Stevenson for missing out owing to illness. The most impressive part of the team’s performance was their desire to win: They played every game with high intensity and it was clear they tried their very best in every game. There were some great individual performances: Thomas, for his fast and direct running; Jonty, for his first receiver play; Ben for his accurate finishing and Ewan for pouncing on spilt balls. A special mention goes to Fred who made a crucial interception in the final; catching the ball, running down the wing, offloading quickly when tagged for the team to then switch the point of attack and score in the opposite corner. This important turn-over broke the run of play of tries going “with serve” and ultimately won the Final. Well done all of you. This team now qualify for the West Sussex County Cup on 1 Apr, also to be held at CRFC.

Team Spitfires also did extremely well. Pulborough B narrowly piped them to win their pool. They accumulated the same number of wins as Pulborough, drew against Pulborough, scored the same number of tries as Pulborough but unfortunately conceded just one more try meaning Pulborough went through to the final. Although they were disappointed not to progress to the final they can be extremely proud of their efforts. Tristan Sawyer, George Reeve, Conor Richards, Oliver Davies, Edward Condron and Alexander Solly were a strong unit, showing good understanding of line defence. Tristan impressed with his understanding of the game, having a knack for being in the right place at the right time, finishing his tries well. Oliver was a consistent with strong evasive running, Conor executed first receiver plays as well as any demonstration in training, Edward and George were reliable support runners and Alexander impressed with his leadership and organization of the team. The team fought hard in the 2nd place play off losing narrowly to a strong Crawley team. They should be really pleased with their performance, they were a credit to the club.

Team Hurricanes had a tough draw, playing their first match against eventual runners-up Pulborough.  As the morning went on, the Hurricanes grew in confidence on and off the ball and their defensive line became harder and harder for other teams to break through as Chichester's teamwork began to shine through.  In attack, Toby Bennett and Oliver Summerfield ran with speed and purpose, with Jude Smith and Edward Harris always managing to be there in support when needed, as well as being the first back into the line when defending.  Relative newcomer Zachary Arens impressed mightily, playing in his first festival as though he'd been doing it all year! Finishing 5th in their pool, the Hurricanes faced local rivals Bognor in the vase playoff.  The team's improvement reached its peak and Harrison Janowski scored a couple of scintillating solo tries, running end-to-end with the smile never leaving his face.  The Hurricanes did themselves and the club proud, ‘seeing off’ Bognor to claim the vase.

All three Chichester U7s teams demonstrated the TREDS values of the game (Teamwork, Respect, Enjoyment, Discipline and Sportsmanship) which was very pleasing.

Thank you to all coaches for their fantastic guidance of the teams throughout the day. Thanks also to the parents who helped set up, particularly Sara Stevenson for turning up even though Charlie was ill, and of course to all parents who supported so sportingly; as always you were by far the best behaved parents!