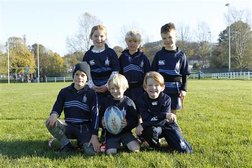 Yesterdays Salisbury festival was a great success and the kids played some excellent rugby.

Though the scores weren't being recorded, we came away happy that we had won or drawn all our games, with our tries coming from a mix of individual flair and genuine teamwork. On more than one occasion we scored tries where every player in the team touched the ball in the build up - that level of teamwork at this age was just great to see.

Going forward our players were great at tracking the ball carrier and when they needed to pass there we always a couple of blue shirts in range with their targets up.

Our defensive line was really well organised, so much so that a couple of teams were stopped in their tracks, baffled at how to get through the line. This is something we really need to build on in training so that we not only stop the other team but push them into their own half and force turnovers.

Due to half-term and it being a bit of a trek, we have decided to skip next weeks tournament in Haywards Heath in favour of training at CRFC.