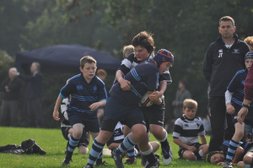 On Sunday 29th September, after a somewhat circuitous route, led by Steve Potter, through the unmarked and in some cases unpaved byways of Sussex a convoy of half a dozen or so cars arrived at Haywards Heath Rugby Club.

This was the first festival of the 2013-14 season, and even better hosted by our old rivals. This was going to be an exciting challenge. We were missing all of the Westbourne contingent, but the squad was bolstered by the recent arrival of four fresh players from United Services, Portsmouth. Even better, having played under “Hampshire” rules for several years they had something to prove.

Within minutes of arriving the whole squad was out doing a series of warm up exercises and Toby joined in with such vigour and enthusiasm I wondered if he was contending for a place having turned down an opportunity on Saturday.

The first game was against Pulborough, who whilst having some excellent individual players were unable to hold Chichester back. From the very first kick downhill the Chichester boys were unstoppable, with three tries in the first half. Kerry’s instruction before the match was to make the most of scoring going down the hill because it would be more difficult in the second half. Clearly the boys were not listening as the scored four more in the second half. Chichester’s defence was probed on a couple of occasions but Pulborough never really threatened. But everyone enjoyed the game and the referee continued to full time allowing Chichester to win 7-0.

Next up were Hove, here the boys played some lovely rugby, even working in a rolling maul going down the (slight) hill. In this game our tries came from a combination of set piece moves and pure Cicestrian aggression, the boys won several scrums against the head, and stole one line-out which resulted in a try. The final score was 4-0 with the last try coming from a beautiful little penalty tap.

Bring on the next team, the boys were really enthusiastic, eleven tries for and none against seemed to have kindled a spark in every single boy.

In the third match we faced Crowborough, who in 2011-2012 beat Chichester in the County Finals. Unfortunately Crowborough had not had a good time last season with weather affecting most of their matches and apparently no training this season at all. But what they lacked in technique was more than compensated for by passion. It was our toughest game yet.

Some of the other teams had suggested that whilst our forwards were powerful and we had some great runners Chichester wasn’t making the tackles. In all honesty this was probably because the boys didn’t need to. This time was different with some of the hits so hard I winced in the comfort of my garden chair.

Only one try in the first half, and some incredible defence from both sides in the second half. Still only the one try when the final whistle blew, twelve tries in total for Chichester and still none against.

A short, almost lunch break, well Peter got the BBQ out and promptly roped someone else in to do the cooking, and then we were up against Haywards Heath. Everyone knew this was going to be a tough one, they had drawn with Crowborough 2-2 earlier in the day. But Chichester was on a roll, the little spark kindled after the Hove game had turned into a blazing fire in each boy.

We started well against Heath, playing down the hill and camped ten metres from their try line for most of the first half. But this was by far the most physical of our games, a clash of heads saw a Heath player helped from the pitch, and both teams rucked superbly, and we even managed to wheel their scrum. But in the end Chichester’s combination of real forwards in the pack, power and strength in the centres and pace on the wing won through, with Haywards Heath unable to dent the Blue’s defence. Chichester won 1-0.

Into the final against – the other Haywards Heath team who had dominated their group. As ever with Haywards Heath this was a real game of rugby, but the boys were not going to let anything stop them. It seems as though the team improved, body positions were perfect, players were going in low to the rucks, we were hitting the tackles hard. Most of the play was in the middle of the pitch, Chichester pushed down towards the Haywards Heath line but over enthusiasm led to penalties and we were pushed back. But then a break from beyond the halfway line carved its way through the Heath defence, first try. Within minutes a pass was out to the right wing and with most of the team involved the ball went over the line. From then on it was pure solid defence, Haywards Heath could not make ground, with the final whistle going at 2-0. The Festival was ours.

The Chichester boys fought their way into the final, the last two games being particularly tough. Any player in the U12 squad, whether they started every game or came on as a substitute played their part. Everyone contributed, everyone played their hearts out. We deserved to win every game, we deserved to win the final and take the U12 cup, and if the boys continue to play like this they deserve to win and win this season.