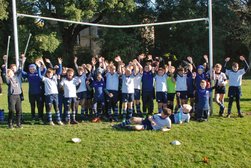 Brighton U12s rather 'blue' after visit to CRFC

It was a perfect day for running rugby, with a slight breeze and the sun shining enhancing the positive atmosphere in the young Chichester squad, following their previous weeks matches. training and squad meetings.

First score to Chi with the ever-present Jaiden Cloke receiving a quick tap ball from a penalty against Brighton for being off feet at the ruck - 1-0. Chichester reciprocated soon after this try with a penalty to Brighton, which they capitalised on with a simple pass to score - 1-1. With Brighton electing to receive the kick off from their try, Chi obliged with a high kick to the Blues, which was knocked on and with the Chi swarming it was gathered, moved wide with speed to allow Freddie Taylor to score in the corner (2-1). With a further penalty awarded to Chi, arising due to sustained pressure, a quick tap’n’go from Frankie Dallaway passing to Jonah Hutchings in support crossed the Blues line, 3-1 to Chi. Following the half time turnaround, Brighton ably moved the ball wide to be awarded the first try of the second half – 3-2. With tiredness creeping in due to the fast paced game into the young players, more penalties arose with Chi benefiting from an awarded penalty, allowing the squad to move the ball wide and into the welcome hands of Finaly Ronnie, who made the final score of the match. Final result 4-2.

Player of the match: Yannick Mack - well done, his second of the season! Awarded due to his unfaltering work rate within the squad.

The CRFC U12s played in white, by reversing shirts to ensure no clash with the Brighton RFC anniversary strip.
Great to see the remaing squad members support those selected on the day - Team Spirit winning through!

Thanks to Paddy T. for supply of the photos.

Tie & Shirts to be worn
Post match food will be provided.
Kick off @ 11am