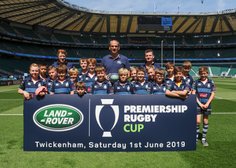 The U12s where back on the road this week, attending the Alton ‘emerging’ festival, with emerging players being taken and given the opportunity to impress the coaches and peers alike, with some players being rested.

For the first match against Petersfield and with storm Callum still in the mix, it was impressive to see the Chi squad looking to move the ball wide with vigour and purpose, with Yannick Mack leading the way with a pick and go from the base of a ruck and stampeding down the touch-line, only being stopped by determined tackling by two Petersfield players. It proves that hard work outside of normal training pays off, with Charlie Page, making an excellent try saving tackle at pace – well done Charlie, keep at it! Though this enthusiasm was dampened by the weather and knock-ons where a plenty, with the result being a draw 2-2. With the following match against Basingstoke, the squad again ran with purpose and penetrated the defensive line to cross the ‘blue’ (white) line twice with Basingstoke only managing to score 1 – Special mention to Owen Osbourne, who crossed the line for his first try for Chichester – well done Owen!

The following two matches where a re-run of the Semi-Final & Final and the Gosport & Fareham RFC festival a few weeks earlier, with the squad playing Alton in their next match. The first half of rugby was not what the coaches and parents had watch in the preceding two games with Alton leading 2-0, so following some half-time ‘motivational’ words the second half saw the squad back on track which lead them to score 2 excellent tries wide, following penetrating runs from all players, demonstrated ably by Finlay Ronnie who made a piercing run through the whole of Alton’s defence to score. It was visible that Alton felt they had the game at half-time, but the Chi squad pulled together, played together and where stronger for it, which lead to a superb come back to draw the match.

With the final game against Winchester, who were unbeaten thus far, the emerging Chi squad began to demonstrate their evolving game management skills, with the lead being taken by Seb McNamara, Finally Ronnie, Archie Ross, Joshua Ellis and Jonah Hutchings in the forefront. It was an extremely tight game with Chi playing up the hill in the first half scoring a well-earned try by the team. Within the second half Winchester threw everything at Chi., but, with determined tackling by Archie Coughtrey, Seb McNamara and Jonah Hutchings to mention three outstanding defence efforts, Winchester where held to bay. Result 1-0 to Chichester, a well earnt win by the squad.

Personal thanks to those parents who waited to the end to wrestle the tent back into it's bag (finally!) - great TEAM effort!

Player of the Festival: Yannick Mack, for his determined straight line running and positive attitude to just get on with the game regardless of the weather conditions.

Please note that there will no Car Parking available at Anstey Park unless a parking permit has been issued. 1 Parking permit is to be issued to each age group squad. All the parking is within a 2-5 minute walk of the playing areas. However we recommended the following car parks for each age group for the most convenient access to your respective playing areas.
Under 12 – Treloars College - Sat Nav GU34 4GL