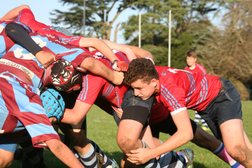 Well , what a miserable day it was yesterday, a big thank you, to all of you who made the trip to the very wet Oaklands Park to witness what I believe was a fantastic game of Rugby, played out in very dificult conditions.

Brighton came to Oaklands sitting top of league 1, and with Chichester hot on their heels .

With a big squad of boys to choose from the warm up session was very structured and after a quick change into the first team kit the boys were ready to go.
With the rain pouring down, the game got underway in what was to become even harder conditions than our game at Edenbridge, and thats saying something !
Brighton appeared to want to kick the ball deep, and pin us down deep in our own half, shortly after the kick off this paid off with the first try of the game from Brighton, subsequently missing the conversion.
Chichester dug deep and started to put pressure on Brighton, it looked very much like we would be in for a try but somehow Brighton were resilient and managed to kick the ball yet again deep into our half, pressure off again !
With the middle of the pitch resembling something like the Somme, Chichester worked hard to keep the ball, with tackling and the loose balls becoming harder by the minute to control as the boys became muddier and muddier.
Shouts from the sidelines of " Get lower in the tackles " seemed to go unheard, with the nippy Brighton backs slipping through tackles due to the mud clad rugby shorts and tops.
Brighton finally running in with another try and a conversion before half time.

Half time and time for a few changes and to reflect on a hard fought first 35 minutes.

With new players coming on, easily identified by the gleaming clean kit, not for long though !

The effort of all the squad was so evident in both halves but no more so than with a great team effort to put Brighton under immense pressure on their line, only for Chichester to take the wrong option at the end and missing out narrowly to put the ball over the line.

Watching the game from the sidelines, you almost forgot that we had been soaked to the skin, it was the fact that the game had become so intense and Chichester really started to get at Brighton, Brighton started to argue with themselves and lost some of the discipline which was so evident early on. Brighton pushed Chichester hard once they got there composure back and the reward for this was another try and a conversion.

With the final whistle came a great sigh of relief from Brighton players, as they knew they had been in one hell of a game of rugby, I can honestly say that I, along with all the coaches were so proud of each and every one of our squad of players as they never gave up , their heads didnt go down once, they proved to themselves and to their opponents that they are not to be taken lightly and also prevented Brighton from getting a bonus point.

The coaching team have identified the areas that need work, and this will start on Wednesday evening.
We have a friendly game against Pulborough next Sunday which will give ALL our squad a chance to show what they can offer the squad, and the opportunity to keep this fantastic momentum going into our next Home game on the 7th against Jersey.

Have a fantastic week and dont forget stay fit, stay focused , and stay out of the pub ! Oh no, that bit is for me...sorry.

****CHANGE TO MEETING PLACE -WE WILL NOW MEET AT CRICKET PAVILION BY 3RD TEAM PITCH AT 10:45AM CHANGED AND READY TO GO - NO NUMBER 1's REQUIRED DUE TO BUILDING WORKS. ******
Match will be played on 3rd team pitch KO 12:30pm bring the whole family to support.