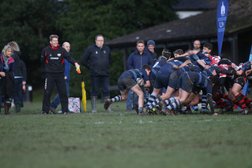 A "humdinger" of a U14's league match at Chichester

With a few shuffles of the pack before the match started due to last minute injuries to players, it was time to get to grips with the task in hand.
It was a perfect morning for rugby, conditions couldn't have been better to start with, and with the sun bursting out a one stage the massive crowd could be seen clambering for their sun glasses, and visors.
The boys were given a few words of wisdom from Steve and David before the kick off, and then truly fired up like gladiators ready to enter the arena.......... Game on.

Chichester kicked off, and you could see the passion in the boys eyes that this was it, with a quick scramble to the floor with the ball bouncing and bobbling about the ball finally popped out to the Jersey backs who passed the ball out wide, with what was to be the final pass out to the winger looking VERY SUSPECT for a forward pass...Jersey ran in with the first try of the game with the advances of Ollie P too late to make any real impact, the resulting conversion being missed.

Time to get the boys together quickly, who all looked a bit shell shocked, but in fairness to the boys did not allow this to disrupt the overall game plan. Steve pointing out some areas to be worked on, and offering a couple of b****ckings for the boys still caught in the headlights !

The boys settled into the game much better after the restart, and soaked up a lot of Jersey pressure, the Chichester forwards working really hard trying to punch through the Jersey squad, only to be denied by a resilient Jersey team. Chichesters backs, started to work there way into the game, with some good work from Simon Ward trying to fizz the ball out to the centres, only to be smothered by the Jersey Backs.
After 20 minutes both teams had been contesting hard in the middle of the park, with Chichester starting to get some momentum, some great efforts from the boys only being denied by the very resilient Jersey Forwards.

With the half time whistle blown the boys gathered together to get the next phase of instructions and take on some much needed fluids, the consensus of opinion coming from the coaches being that the game was there for the taking , but we needed to up our game. Instructions on board, the boys came out with all guns a blazing.

Simon Ward kicked deep into their 22 to put pressure on Jersey straight away, the ball working its way out wide from right to left, with Dan Bentley only being denied a try, by having a foot out of play before putting the ball down. AAHHHH ! SO CLOSE...

The boys had really started to up their game as they could sense the tension of the game spilling out to the massive crowd that had gathered on there side of the pitch. With more and more pressure being put onto Jersey, you could sense that we were getting close, somehow Jersey managed to defend their line, with wave after wave of attack coming from Chichester. The ball had moved over to the right side of the pitch now and with a mass scramble Ollie P thought he had stolen the ball from Jersey for a try, only to be pulled back by the referee for a Jersey penalty.AAHHHHH ! SO CLOSE AGAIN ...

With the pressure now building to fever pitch the forwards rallied together to collectively get Harry Sharp and the ball over the line........ TRY .........YES........ A great team effort,fully deserved.
The resulting conversion being missed narrowly, but the boys could smell the victory it was that close.

With changes being made to the Chichester line up Harry Sharp was given huge round of applause for his contribution as he was changed for a fresh and fired up Arif.
Chichester ready for the next phase. Again the boys huffed and puffed and started pushing Jersey back , the backs really getting stuck in, with great work from Lewis Woolcombe who ran at his opponents like a man possessed, punching holes in the very weary Jersey defence, with more attacks from Joe Knight wave after wave of attack came, finally with another great team effort Ollie P driving over to get his reward for a hard fought game ....TRY........COME ON........The conversion being narrowly missed, it didn't matter though as Chichester started believing they could really do this.
Jersey looked stunned, and didn't look as though they would have any reply, but in an almost repeat of the Jersey first try the backs pushed the ball out wide to run in a the second try for Jersey.

TEN ALL.......The boys and the ever increasing crowd stunned !

At the restart the crowd went silent for a while, and dark clouds started to form over Oaklands Park, with minutes left on the clock Chichester continued to throw the kitchen sink at Jersey only to be denied by the referees final whistle.

On the warm down talk after the game, words such as SPIRIT..PASSION..AGGRESSION were all used by Steve and David.

Talking amongst all the coaches after the match they were all agreed that this had been THE best game of rugby they had seen the boys play, in a very very long time.

The boys should be very proud of what they have achieved today, it had been a fantastic performance, and one that we are all proud to have witnessed.

A big thank you to all the coaching staff, without whom none of this would be possible.

And I must thank all the Mums and Dads, Brothers and Sisters who made the effort to come and witness this great spectacle, your support is always most welcome .