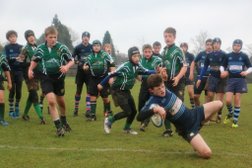 Chichester remain positive despite away loss

Texts and Emails had been flying around all week, about player availability, even an email on the way to the ground to say that Simon had gone down with a bug and would be missing.
Despite all of this the squad met up for an early training session prior to the match, giving the coaches time to tweak the starting 15.

A full away debut was to be handed to Luke Potter after impressing in earlier training sessions, and several players shifted around out of positions to compensate for the injuries and sickness in the squad.
On the bench for Chichester, George Hales, Cameron Gillespie and Arif, so other than Henry Kay, sidelined after picking up an injury in the warm up, a strong bench.

Ollie P, was handed the captaincy with vice captaincy going to Joe Knight (Who had a stonking game by the way).

The weather had behaved itself and although cold the conditions were perfect for what should be a great game of rugby.

Heathfield had the kick to start with and looked sharp from the off, forcing us back into our 22 early on with wing play proving difficult for our boys to counter. Tackling being a major issue for Chichester, with some really nippy wingers difficult to get hold of, needless to say that after 4.00 minutes Heathfields persistence paid off with a Try which was duly converted.
Heathfield continue to run the show for long periods in the first half with better handling and tackling in the back line although our forwards were far more superior, only being let down by the inability to keep hold of the ball !
Charlie Philips took a knock on the nose in some hard fought tackling in the middle of the pitch , being changed for Cameron Gillespie whilst we dealt with the blood !
Heathfield continued to cause Chichester problems, and following a well drilled switch reverse pass left our back line with a gap big enough to drive a chieftain tank through..... Heathfield try, converting as well.
With the first half looming Chichester picked up the pace and started to get some momentum going, a great storming run from Jackson down the wing, only to be thwarted by a very high tackle around the neck, Jamie picking up the loose to put Heathfield under pressure till the last.

Changes made at half time with Arif coming on for Kane who took a hard hit and damaged his shoulder, George Hales coming on for Jackson who was struggling with his neck after that very bad tackle of earlier, Cameron had come on for Ben Boswijk just before the interval.

Chichester came back fired up with some really aggressive play at the start of the second half , and really showed great character to push the Heathfield players back, our Man of the Match Jamie Holmes putting in a real shift and reaping his rewards with a well worked try, the resulting conversion being taken by our new kicker Ollie P ? who didn't quite have the legs to get the ball over.
Heathfield continued to play rugby with well worked drills in the back line , switch passes still causing us problems, although Jamie put in some crunching tackles,to keep Heathfield quite for a while. However Heathfields back line stepped inside and the nippy little lad at the back put the ball down for another try, the resulting conversion going over.
Chichester did not let their heads go down , and had two decent opportunities to get the ball down over Heathfields line, only to be held up on one occasion and loosing the lose ball on another.
With ten minutes in the game left the boys seemed to switch on and started piling more and more pressure on Heathfield, with another stand out player for the day Joe Knight getting the teams second try of the day. The resulting conversion not going over.
With the clock running down, Chichester huffed and puffed but could not make any further progress, the final whistle coming all too early for Chichester, making the scores to 21 - 8 .

With the final whistle and the shaking of hands came the coaches debrief, all the boys were disappointed because they knew at the final whistle that they are better than the result would suggest, the coaches reinforcing this. On reflection the boys paid the price for a poor start, and with players out of position and many changes in the team, this proved fatal in the first ten to fifteen minutes of the match.