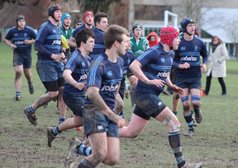 Chichester Colts progressed to the cup semi-finals with a fantastically committed defensive performance against Heathfield.

Sunday saw dry but very blustery conditions for the eagerly awaited cup quarter final against a very strong Heathfield side. Having been beaten by the visitors earlier in the season Chichester Colts were on a revenge mission. Bouyed by a pre-match address from 1st XV Captain Ben Polhill and boosted by the confidence gained from their ever improving performances, the Chichester team believed they could surprise Sussex high flyers Heathfield.

Conditions were key and with the slope and strong wind favouring the team playing towards the cricket pavilion end it was crucial that Chi made the most of this advantage in the first half.

From the kick-off the visitors chased well. Mason-Grant back on the paddock for the first time in months pulled off what seemed to be a text book turnover with his first intervention. The ref didn't agree however and Heathfield's 12 chipped over to take an early 3-0 lead. As they confidently returned to their half for the re-start they had no idea that they would not be troubling the scorers again.

Despite the early set back Chichester knew what they had to do and took the game straight back to the oppo piling on the pressure and pinning them in their own half. The tackling and rucking were fierce with Nearney and Selwood felling Heathfield runners for fun. After one such attempt to run the ball out was cut down, Adlington, as ever was first over the ball to secure the penalty. Kicking metronome Moss easily slotted and Chi were level at 3-3.

The next few minutes saw more of the same, Ash and Hockey were breaking the gain line and putting Heathfield on the back foot, a rampaging run from Mason-Grant and a clean break from Adlington led to the increasingly desperate visiting defence giving up another penalty. Moss converted again and Chi now led 6-3.

More home pressure followed, a driving maul from a line out was halted just short of the line and a super backs move when Hutchin burst through to send Selwood racing for the corner was called back for a marginal forward pass. As the half came to a close Chi knew they needed more points to show for their dominant display. Heathfield's scrum had come with the reputation of being the strongest in the league, but Chi's front row of Rugman, Hockey and Mason-Grant, had been on top from the start. Now they pushed Heathfield off their own ball and were awarded a penalty as last play. From a difficult angle Moss pushed the kick agonisingly wide. Half time 6-3.

With the wind becoming increasingly strong it was obvious to all that an enormous defensive effort was required for the second half. Chichester Colts were up for the challenge. For the next 35 minutes, plus 3 just to add to the nerves of the supporters, Chichester put their bodies on the line for the cause. Ash was a human wall stopping forwards in their tracks, the backs were fast off the line all day, Tucker and now Truman on the wings making text book tackle after tackle. The strength of Centre's Hudson and Selwood had been key all day making both tackles and turnovers. Heathfield, and their supporters were now getting desperate. A strong drive by their tight head was held up short, then a missed a penalty and drop goal in quick succession as the visitors tried to get the equalising score that would see them through. They were awarded yet another penalty with a minute to go, but the now disheartened 12 did not look confident and his effort flew wide. A few more phases and more heroic defence by the home side saw the ref blow with the half time score still intact.

Chichester won through to the semi (v Horsham) with a truly remarkable defensive performance with every single player giving everything for the cause. Proud to be Chi.