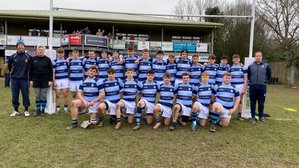 Colts start with a win

After a good few weeks of pre-season training Chichester Colts were ready and up for a game against local rivals Worthing.
With a large squad available everyone was keen to show the coaches that they should be in the starting 15 come the first league game in a couple of weeks,
For the first ten minutes the tackling was fierce as both sides were keen to get on top, Chichester were playing nicely but giving a few too many penalties away around the rucks, From one of these Worthing crashed over for the first try. This woke Chichester up and after some fine positional kicking from fly half Moss they worked their way into the Worthing 22 and swift handling put Tucker over in the corner, A cracking conversion from Moss tied the score at 7-7. The Chichester forwards were now getting on top in the set piece giving a good platform for the backs to show their skills, Bell finished off a fine move and the boys led 14-7.
The two teams then swapped tries with Worthing scoring from another penalty awarded close to the Chichester line and Selwood finishing off a fine backs move which started with an excellent Mendoza break from the half way line. At 21-14 Chichester were well on top but after a driving maul with Ash at the helm pushed Worthing back some 30m a big Worthing forward somehow emerged with the ball to break clear and close the gap to 21-19. This was to prove the home sides last scoring opportunity as Chichester's superior fitness allowed them to dominate the final period. It was now unrelenting pressure from the boys in blue and two well stuck penalties from Moss knocked the stuffing out of Worthing and moved the score along nicely. In the last ten minutes Chichester crossed the home line three more times. The first was an individual break from Hudson off the back of a maul, and he was just too powerful for the home defenders, Forwards pressure told again for the next try which saw Rugman pick and crash over after Leather had been stopped just short of the line. The final try arrived after Nearney and Deavall, workhorses all day, smashed into the opposition sucking the defence in allowing swift hands from Grace and Tucker to put Gallimore over in the corner, Fittingly after a fine game with the boot Moss slotted the extras from out wide.
All in all a very encouraging first performance which bodes well for the season to come.
Share via
FacebookTwitter
https://www.pitchero.com/clubs
Recent news