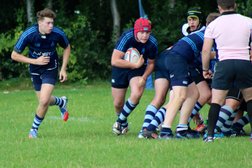 Colts sparkled at times but ultimately failed to kill off a spirited and organised Pulborough side.

On another glorious Oaklands afternoon a decent crowd gathered to watch Chichester Colts play their second warm-up friendly of the season. With a large squad of 27 available and on the back of a fine performance against Hove the previous week expectations were high.

Chichester started strongly enough, with Moss kicking for territory effectively and the forwards solid in the set piece. Despite plenty of possession however there was a lack of penetration and spark. Against a Pulborough side whose forwards were clearly up for the physical battle clean breaks were hard to make. In rugby though sustained pressure will usually brings some reward and Moss kicked a good 3 pointer following some illegal work by the black and white pack at the breakdown.

The rest of the half turned out to be a very close contest and a try late on by Pulborough meant they turned round at half time 3-5 ahead.

Chichester made plenty of substitutions at the break but didn't make the improved start they wanted. Instead they turned over good possession twice in their own 22 to allow the lively visiting 10 to dance through a couple of questionable tackles and score under the posts.

Faced with a 3-12 deficit Chichester took a foothold in the game and started to look increasingly threatening. Firstly Pratt, who looked lively as soon as he entered the fray, carried over from a driving maul, then Hudson at 8 picked up from the back of an attacking scrum and was too strong for the Pulborough defenders. With Moss again striking an excellent conversion Chi now led 15-12. Even better was to come when Tucker followed up a clever kick from Hutchin forcing Pulborough's defence to cough up the ball to a flying Sellwood who ran in from halfway beating the full back on route. Extras added again by Moss, 22-12 to Chichester.

Pulborough would not be beaten though and attacked continuously in the last 10 minutes. With little ball of their own Chichester struggled to relieve the pressure and succumbed to two late tries.

There was certainly encouragement from some of the Chichester play but overall too many errors and poor decisions undid the good work. Pleanty to work on then with the League starting in 2 weeks