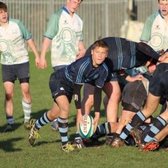 Chichester made the long journey worthwhile with a resounding victory against their East Sussex rivals.

The last time i took a team over to Hastings we had 5 tries disallowed and only came away with a narrow victory. The way this game started it seemed to be a case of deja vu.
First second row Ash, who was to prove a handful all game, crashed over carrying half of Hastings on his back. Deemed held up.
Then Adlington broke off from a maul and sidestepped the full back to score in the corner. This was also ruled out and the visiting supporters began to get restless.
Chichester however did not get disheartened and continued to drive forward. Moss was kicking well for position and the Chichester line out was utterly dominant. Scott claimed all of our own ball and turned over the Hastings line out with regularity. One such steal led to the first try when the forwards mauled towards the Hastings line and Stirrup found Nearney at pace who charged over. 5-0.
Five minutes later Ash burst forward from a ruck and with knees pumping was unstoppable from 20m out. Moss converted and Chi now led 12-0.
Now with a comfortable lead Chichester began to move the ball around in the backs and a slick handling move just before half time led to the powerful centre Selwood touching down for his 6th try of the season. At the break Chichester led 17-0.
An injury to Deaval meant that Adlington switched to 8 with Brereton having a fine game now at 7. Fitzmaurice and Watmore now also entered the fray.
Chichester again dominated from the start of the second half, but Hastings defended their line gallantly, their fullback making a very brave tackle to bring down the rampaging Ash in full flight just shy of the line. The defence got more and more desperate as the pressure built and when Chi were awarded a penalty the alert Moss took the tap and helped himself to an easy try.
A final substitution saw Spreckley come on on the left wing and when Nearney popped the ball to him in the corner he scored a good try with Moss driving him over the line. Converted by Moss from wide out the score was now 29-0.
Chichester full back Tucker had had a good game fielding the Hastings kicks and returning them with interest. He was also coming into the line to create the extra man, an intervention that gave the ball to Selwood with two men outside him. With confidence and skill the captain sold the Hastings defenders a huge dummy, cut back inside and scored his second try of the afternoon. Moss again converting from wide out.
In the last couple of minutes Hastings came forward looking for a consalation score and got it when their centre danced through from a quickly taken tap penalty. Final score Hastings 7 - Chichester 36.
All in all a pleasing win but with plenty still to work on ahead of next week's big game at Hove.