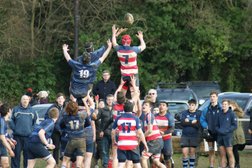 Chichester Colts are through to the last 16 of the National Colts Cup plate competition.

Chichester’s young guns travelled to Dorking for the regional semi-final of the National Colts Cup plate competition for what was expected to another tough encounter and so it proved. The Blues were missing several key players with influential skipper Joe Stirrup amongst them.

Dorking in red and white kicked off against the very strong cross wind and immediately the Blues carried hard with Watmore and Rugman making big yards, good early pressure forced Dorking to clear their lines. Chi`s lineout worked well and the forwards swarmed forward. The home side had a big pack but could not halt the juggernaut with Brereton on hand to get the early score with less than 10 minutes gone. Adlington hit a great strike from wide out but the conversion just held in the wind. 0 - 5. The blues were winning the early collisions with Cross sniping close to the ruck and Grace using the wind well with some intelligent kicks. The home side re-grouped with their dangerous number 13 getting over the gain line and the blue defence had to scramble. Crosby-Wilshire, as he was to all day, was leading the tackle count with relentless chop tackles backed up by a bone shuddering hit from Firth as they manned the barricades, close to their line. The game was on a knife edge and Constable, on in the back row, robbed well in the tackle and Adlington was everywhere but the Blues were picking up the penalties until the yellow card came. Eventually Dorking’s big second row surged over for the home score. 5 - 5. The Blues were struggling to get out of their half and with a penalty easily taken by the reds they ended the first half 8 - 5 down.

Now the Blues had to play the second half into the strong wind and the home side were buoyed; but Chi really pulled together. Moving the ball was difficult but Ellis, now on at 9, distributed the ball well and Patterson got on the outside once or twice but passing was very difficult into the strong wind. The forwards were however starting to get on top with Fitzmaurice having a storming game, dominating the lineout and putting in several crunching tackles. Prior came more and more into the match with his power carrying and slowly but surely the away side turned the tide. A fantastic catch and drive was thwarted by a side entry with the line just a metre away. The Blues fully expecting the penalty try to be awarded but no! A yellow card to the offending player and just a penalty. It was a bitter pill to swallow as the try had looked certain. Chi were desperate to get the score but made a couple of errors and the chance went. The Blues however were not to be denied and although they weren’t that fluid when they attacked, they attacked hard. Constable hit a fantastic line to breach the Red defence. His 15 metre break with quick ball from the contact sent Rugman bulldozing to within 2 metres of the try line and after two more phases Adlington twisted and reached over for the deserved score. He calmly slotted the difficult conversion. 8 - 12. There was still 10 mins to go and the Blues had to rely on every player to defend as Dorking raised one last push. But the Blues tackled to a standstill and the home side could simply find no way through. A fantastic win! 8 - 12.

Chichester have a home match against Westcliff in the 5th Round.

Paul Colley, Director of Rugby - “This was a very difficult game with the wind making passing very challenging but as a team we just dug deep. Our pack were tremendous today and gave us the edge. The backs were hampered going forward but to a man put their bodies on the line in defence. A great team effort.”

Next week Chichester face big local rivals Pulborough in a league and cup double header (Sussex Cup Quarter Final). It would be great to get as much support up on Sunday as possible. Kick-off is 14:00.