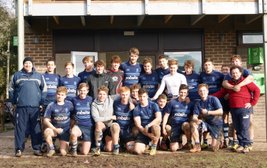 Titanic cup match sees Chichester Colts through to last 8 in the country.

Chi Blues young guns took on Westcliff at Oakland’s Park with a quarter final at stake in the National Colts Cup plate competition. Following 5 bruising rounds the Blues took on the powerful looking Essex outfit in what turned out to be another titanic battle.

Chi played into the strong wind in the first half and although they started brightly it was soon apparent that the away side were going to represent a real challenge. They disrupted the Blues ball and forced early errors. With their first good possession Westcliff moved the ball with real intent, their No. 9 darting into space and the big centre breaching the first line of defence. Good hands followed and 10 minutes in Chi were down 0 - 5. Chi were battling hard with Constable and Adlington going toe to toe with their bigger opponents and the personal duel between the two No. 8s was one of the features of the match. The Blues spluttered into life with some good forward drives and Margarson and Patterson threatening with their dangerous running but Westcliff were very well drilled and proved difficult to break down. Whilst Renwick cleared his lines well the blues were definitely on the back foot. More pressure and with 30 minutes gone Westcliff got on the scoreboard again. With a well worked drive and some pretty poor defence close to the line they scored their second try with the conversion. 0 - 12. Chichester’s scrum was rock solid and after a shaky start Firth and Fitzmaurice started to get to grips in the lineout. With 5 minutes of the half left a great forward surge took play to within 3m of the try line. Stirrup whipped the ball away and with Truman entering the line he could have perhaps dived over for the try but moved the ball on for Seehawong who shot over. Conversion missed. 5 - 12 at half time.

With the wind at their backs the Blues turned around knowing they were in the game but the wind wouldn’t win it for them. The Blues really upped the tempo. Fitzmaurice hit a couple of great lines cantering up the pitch great ruck clearances from Stirrup and Prior and now the blues were starting to dominate. Renwick three times punched long raking kicks deep into Vultures Corner but three times Wesciff defended stoutly and the Blues were going to have to dig deep. Only great tackles from Constable, Rugman and Crosby-Wilshire held the away side a bay. The home side had produced 25 minutes of intense pressure and still no score but then Patterson produced almost a carbon copy of last week’s syntialting try with another beautiful swerving run ghosting away from the resilient Westcliff defence to score close to the posts. 12 - 12. With 10 minutes to go the Blues upped the tempo and again Renwick punched the ball deep into Vultures Corner. The pressure told as the Blues won the penalty. Renwick under real pressure slotted the vital 3 points. Westcliff pushed hard and forced Chi deep into their own half. Three superb defensive efforts followed. Firstly Munroe stole a vital strike against the head then Constable did a remarkable wrap tackle on the Westcliff No. 8 with the line only a metre away. Finally the killer blow followed as Adlington won the vital penalty turnover and Renwick pumped the resulting penalty long down the touchline. Chichester even fashioned another kickable penalty and although pushed wide the game was theirs. Final Score 15 - 12

Matt Adlington - Chichester’s assistant coach: “Wow what a win! We didn’t quite play at the level we wanted but when it really counted we had enough.”

Paul Colley - Chichester’s Director of Rugby: “This was a great cup tie. Westcliff were magnanimous in defeat and gave us a fantastic game. A real tough and physical match but in the true spirit of rugby.”

Chichester now enter the quarter final with the draw later this week.

Next Sunday the Blues get back to league action v Crawley at home.