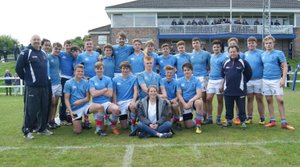 The last game of the season saw Chichester take on local rivals Worthing in the final of the Sussex Cup.

And so the 2015/2016 Colt’s season came to a close with the awards evening on the 14th May, well attended with a host of winners, as the team, parents and coaching staff celebrated what has been a pretty remarkable season. Finishing second in the Colt’s Premier League and reaching the semi-final of the National Colt’s Cup plate competition highlighted what a successful season this has been. James Fitzmaurice took the player of the season award with Will Prior taking the player’s player award.

The final game of the season saw Chichester take on local rivals Worthing in the Sussex Cup with the Blue and Blue reaching the final for the first time in many years.

The Worthing side that Chichester beat in the first league game of the season bore no resemblance to the side that faced them at Brighton RFC for the cup final. Worthing have assembled an all-conquering U17 team (officially the best in the country) and the Blues knew the Yellows of Worthing would be a massive test having dispatched a strong Horsham side by 40 points in the semi-final.
The team started strongly with Margarson and Stirrup, as they were to all day, stunning their much bigger opponents with the ferocity of their tackling forcing errors from the dangerous looking Worthing back line. The Blue’s forwards soon started to get amongst the Worthing forwards with Elliot Quinten, probably having his best game of the season, leading from the front in what was to turn out to be a ferocious forward exchange. Once the initial attacks from the Worthing had been repelled the Blues started to control the play. Hutchin moved the ball well and went on a couple of darting runs cutting the Yellow’s defence apart. Twice he looked like he was in but the support didn’t quite arrive in time and good scrambling defence snuffed out the threat. The pressure told though with a calmly slotted three points by Hutchin. Worthing countered but the Blues defence was immense cutting down the threat. The Blues were now working the possession and punched into the corner. Fitzmaurice won the lineout with Chichester marching for the line the Worthing defence came from the side deliberately killing the score. The referee ran immediately behind the posts for the penalty try and a subsequent yellow card. 20 minutes in and the Blues led 10 - 0. The scrum was pretty even although Prior was starting to win his personal battle against the Worthing skipper and tight head. The lineout was shaded by Chichester although credit to Worthing with limited options they were still winning enough ball to give their very dangerous backs some ball to run. Worthing looked to up the tempo as the half was closing but time and again the Blue defence to a man held strong. Margarson was a one man tackling machine and Worthing were shaken but a running theme of the game started to take hold. The referee really didn’t like the Blue defence at the tackle area and with a very keen interpretation of supporting your body weight the penalties started to rain in. Fortunately Worthing had no kicker but Chichester lost the first of four players to the sin bin. However, the defence was still incredible and Worthing could not breach the line to turn around 10 point deficit at half time.

The game was on a knife edge but Chichester just couldn’t keep 15 players on the pitch with a man in the sin bin every 10 minutes for a variety of curious calls. Whilst there is no doubting the quality of Worthing’s attacking play the rub of the green was definitely not going the Blues way. Off their feet was pounced on by the referee against Chichester but didn’t seem to apply the other way round. Maybe the Yellows just played the referee better but the upshot was every time some good possession was achieved another penalty and a yellow card. Worthing sensed their chance with their forwards eventually breaching the line twice in succession. With 15 minutes to go 10 - 10 and all to play for. The Blues were still very much in the game and twice they seemed away. Margarson made a fantastic break but his pass from the tackle bounced agonisingly out of reach of the fast approaching Strirrup and the chance was gone. Worthing were really upping the tempo into the last 10 minutes and used the bench well with the replacement No. 9 and prop both offering real momentum. But the game was still in the balance but then another cruel break with Ned Renwick, only on for a few minutes, strangely yellow carded for a spurious offence which he seemed to be a long way from. Last 10 minutes and down to 14 players again. Worthing surged forward, great tackling and spoiling from Adlington and an unbelievable steal from Constable stopped what seemed like a certain score. Hutching broke and the Blues with only 3 minutes to go forced their way deep into the Worthing 22. They looked to have forced the easy penalty for in at the side but no. An incredible holding on call from the referee stopped Chichester forging ahead. With less than 3 minutes left the 30 minutes of playing with 14 men took its toll and the very quick Worthing backs broke out wide to score in the corner to take the spoils. Full time 15 - 10.

An unbelievable effort from the Blues with the Worthing backs in particular being at least a stone a man bigger. The heart, commitment and skill was there in bucket loads. Worthing were probably the best side Chichester have played this year and the Blues can hold their heads high that this was a very, very close contest. As the Sussex President stated after the match “…..the best Sussex Colt’s final he had ever seen.”