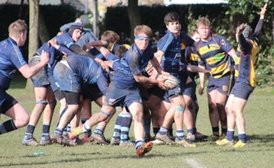 A sunny Oaklands Park welcomed the Colt's supporters for the penultimate league game of the season. Unfortunately, whilst the result was good, the overall performance was not as bright as the conditions.

Choosing to play against the strong wind in the first half Chichester made a good start, forcing their opponents back and pressurising their half backs as they tried to clear. The scrum started strongly with Pratt, Hockey and Rugman in the front row gaining ascendancy and winning a couple of strikes against the head. The Worthing 9 had little choice but to feed the put in to try and maintain possession. Unfortunately for him he performed this trick once too often in front of the posts 30m out. Moss calmly slotted the resulting penalty and Chi led 3-0.

Worthing, stung into action by this early set back, used the strong wind to gain good field position and mount some pressure on the home defence. In what has become a worrying trait, the Chichester forwards then conceded a series of penalties in short succession giving their opponents encouragement and forward momentum. From a quick penalty Worthing moved the ball wide and their centre went over for a try. The conversion was missed but the visitors now led 3-5.

Chichester needed to up their game and scrum half Stirrup showed the way, first with some solid tackles and then a splendid 40m break beating several tackles. The supporting players could not quite turn the opportunity provided into a try but the momentum was now with the home side.

Worthing continued to kick deep to clear the pressure but Bell having a good game at full back was always dangerous running the ball back, linking well with Tucker and Gallimore. The pack began to move again, winning good line out ball and driving forward from the set piece. The hard working Nearney was held up over the line and from the resultant scrum Moss received the ball at 10 dummied past his opposite number and scampered over under the posts. He converted his own try to make it 10-5 to Chi.

For the rest of the half Chichester kept Worthing under pressure but inexplicable knock-ons and forward passes spoilt a number of good opportunities to stretch the lead.

With the conditions now in their favour Chichester played almost the entire second half at the Worthing end. The scrum remained on top and strong carries from Constable and Fitzmaurice kept the visiting defence scrambling. Hudson carried well at 12 and broke the gain line on several occasions only to see chances go begging again with a poor final pass or hopeful off load.

When Hudson once more broke through however with 20 minutes to go his offload to Bysouth worked perfectly and the speedy wing finished well in vultures corner being just strong enough to fend off the covering Worthing tacklers. Conversion missed from out wide, 15-5.

In the last quarter Chichester pushed hard for more tries but the Worthing defence held firm. The forwards with Watmore now on and providing fresh legs attacked down the right hand side, a quick switch of play and the ball quickly moved left through Moss, Tucker and Bell before left wing Bysouth received the ball out wide on the 22, cut inside his man, stepped the full back before rounding under the posts for his second try. An easy conversion moved the score to 22-5.

With a few minutes left Chi chased the bonus point try but to no avail. As previously this season Chichester failed to turn their territorial domination into tries, a trait that will probably cost them a league position come the end of the season.