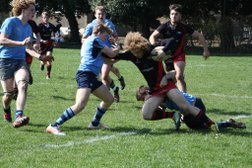 A bright sunny Mothering Sunday saw Chichester host Jersey in the Colts Premier league fixture, going into the game Chi were unbeaten in the league and needed a win to keep the potential of a league title in reach.

With both sides having early touches of the ball with no real threat it was Chi to settle their nerves first with a 35m penalty from full back Ned Renwick, this seem to spark both teams into life, with Jersey applying the pressure deep inside the Chi 22m but resolute defending the home side were awarded a penalty 5m from their own line that was subsequently thumped deep inside the Jersey half. The first try of the game followed after a number of well strung phases from the Chi pack the ball was released to Baxter on the left wing who danced his way through the Jersey defence to dot down on 11mins, converted by Renwick. Within 2 minutes of the restart Chi were over the line again, this time from a break from Alex Margarson leaving his defender flat footed - Renwick adding the extras.

Chi weren’t to have the first half all their own way, with the Reds of Jersey applying pressure and testing the blue defence, who were standing up to the challenge with Harry Blatch, Sam Henshall and Tyrese Makasi racking up the tackle count. Another penalty in front of the posts gave Renwick the chance to push up the score HT 20-0

With the second half only minutes underway Chi were over the Reds line again, this time quick thinking from the Capt Prior to take a quick penalty to score under the posts, Renwick reliably adding the extras. A solid scrum from blue eight saw scrum half Ellis darting down the blind side to secure the bonus point with another successful conversion from Renwick. At 34-0 Chi emptied their bench. With a little bit of restructuring in the Chi defence and Prior in the sin bin Jersey’s pressure was awarded with a well worked try from a lineout. However the blues were to have the final say with debutant Elliot Haydon scoring a well taken try to left of the posts after more excellent possession from the Chi pack.

A final score of 41-5 and a league title shootout next week away to Horsham Chi Head Coach “Pony” Moore said “Whilst we worked hard for the scoreline this week, if I am honest it doesn’t do Jersey justice, they were physical and gave us a good game. We now switch our focus to Horsham next week with a league title to play for”