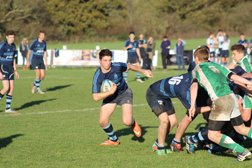 Chichester Colts made it 2 from 2 in the league with victory at Horsham.

Chichester travelled to Horsham bouyed by recent thumping victories over Tottonians and Bognor but knowing that today's game would be a much bigger test.

With the sun shining and conditions underfoot surprisingly good Chichester were keen to get off to a good start. They didn't. A poor clearance kick and a couple of early missed tackles invited Horsham on and led to some scrambled defending in the first few minutes. Gradually though Chichester warmed to their task and strong drives from Ash and Hockey worked the ball into their opponents half. Rugman and Deavall pushed further on and Horsham killed the ball 40m out in front of the posts. Moss opted to kick for goal and calmly slotted the 3 points.

Horsham came strongly back and their lively backs were keen to run at every opportunity. Chichester had to be on their mettle defending out wide and wings Bysouth and Bell repelled the wide raids of their opposite numbers. From a quick tap penalty though Horsham moved the ball left and used the overlap to score in the corner. The try was not converted but the home side now led 5-3.

Chichester were not to trail for long however. They put pressure on from the kick-off and won a scrum central 30m out. In what was probably our best backs move of the season so far, full back Tucker raced onto an inside ball from Selwood and split the Horsham defence apart. He was hauled down 5m from the line but popped a pass off the ground to the supporting Selwood who fed Bell to finish in the corner. Moss hit the post with the conversion but Chi now led 8-5.

Horsham regained the lead when they twice went down the short blind side at rucks and their 9 ran in under the posts. With the conversion successful they now led 12-8. There was still time left in the half and Chichester set up good ruck position in centrefield. When Horsham transgressed once too often for the refs liking Moss took the opportunity of another 3 pointer to close out the half traing by just 1, 12-11.

Whilst Chichester had played some good stuff in the first half they were yet to truly execute the game plan which was to take on Horsham in the forwards and deny their backs the ball. The second half started much better. With Nearney winning clean lineout ball the forwards drove 25m up the pitch and were still going before inexplicably the backs took over and the opportunity was lost. Given a second chance a few minutes later a repeat of the forwards dominance in the driving maul propelled towards the Horsham line. Hockey broke off the back and was just short but Chichester picked and drove to the line where Adlington dived over for the score. Moss kicked an excellent conversion and Chi now led 18-12.

Horsham were becoming rattled and more penalties ensued. This enabled Chichester to play the game in the right areas of the pitch. Eventually Horsham gave away a pen too close to their own posts giving Moss an easy opportunity to extend the lead to 21-12.

Chichester like to treat their supporters to nail biting finishes, so having spurned an opportunity to kick to the five and score from their lineout dominance, the Colts allowed Horsham to kick and chase out of their half and eventually work the ball to their wide backs who scored with 7 minutes remaining . With a good conversion struck Chichester now only led 21-19.

Try as they might though Horsham could not break through again. The back 3 of Gallimore, Bell and Tucker tackled heroically to snuff out any threat and the hosts were denied.

All in all an excellent team performance, where the missing weren't missed, and 4 points away at Horsham is always a good result.

Next week a home friendly V Guilfordians followed by a home league fixture V Heathfield on the 23rd.