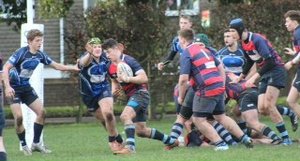 Chichester Colts produced an excellent performance to kick-off 2015 in style.
From the off today Chichester were determined to be on the front foot against traditionally strong opponents. An excellent flighted kick-off from Moss saw Hockey smash into the Brighton player as he attempted the catch forcing a knock-on and scrum.
The recent work that the pack has done on the scrum machine paid off, as the front row of Pratt, Hockey and Rugman destroyed the Brighton pack. All game long the Chichester scrum pushed Brighton back and several balls were won against the head.

Chichester pressed strongly and the powerful running of second rows Ash and Nearney sucked the visitors defence in. With pressure mounting on the Brighton line a penalty was conceded. Moss calmly converted the opportunity and Chi led 3-0. 10 minutes later and Brighton again could not stop the rampaging Chichester pack legally.Moss stepped up again and doubled the lead, 6-0.

The visitors had a couple of lively backs in their 14 and 15 but every time it looked like they might breakthrough Chichester's excellent full back Tucker cut them down with text book tackles.

At the over end the Chichester line-out was functioning well with Scott winning plenty at the front. Quenton on as an early sub for the injured Adlington organised the driving mauls and Chichester charged to the line. Hockey having a fine game saw his opportunity and dived over. With a fantastic conversion from out wide Moss made it 13-0 and the ref blew for half time.

At the start of the second half Brighton came at Chichester hard but tough tackling by Grace and Selwood in the centres denied them scoring opportunities. By now Ash was in full stride terrorising Brightons defenders with his rampaging runs. One such saw him burst through 4 or 5 tacklers before being pulled down just short of the line. Quenton, however, supporting well collected the off load and went over in the corner. Chichester now led 18-0 and had their tales up.

Constable, now off the bench, started to be a nuisance at the breakdown and Nearney switched to 6 piled the pressure on as Brighton tried to clear their line. Fitzmaurice had now added his considerable height to the pack and Munro brought fresh legs into the front row. Brighton were once again shunted backwards on their put in and as the ball squeezed out Constable was quickly on it and touched down for the third try. Conversion by Moss 25-0 and the crowd were loving it.

Truman came on at 15 and immediately made an impact, carrying strongly and breaking the game line. The illusive 4th try however would not come and Chichester had to defend strongly on their line for the final couple of minutes as the visitors looked for a consolation. To a man they tackled hard and determinedly held on to the clean sheet. Final score 25-0.

A quality performance that showed what this team is capable of.