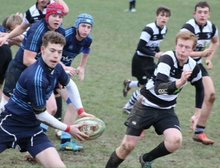 Colts come back to win

Chichester Colts finished strongly to secure the points at Pulborough

On a dry but blustery day Chichester made a decent start at local rivals Pulborough. With the slope and wind in their favour the visitors put early pressure on the home defence, tackling hard and pinning them in their own 22. The new centre partnership of Selwood and Tucker were up quickly up on their dangerous opposite numbers allowing them no room to run, and with ball in hand Hudson and Nearney drove strongly. Soon enough the pressure told and after 5 minutes Pulborough conceded a penalty which Moss easily slotted for Chi to lead 3-0.

Chichester had Pulborough on the back foot again and were very unlucky when their dominant scrum were penalised when pushing Pulborough off their own ball. No matter, after Pulborough had cleared to touch, the Chi jumpers disrupted the home lineout and flanker Adlington burst through to intercept the scrum half's pass and race in 30m to score. The difficult conversion was missed and Chi now led 8-0.

Tactical kicking from Moss at 9 and Hutchin at 15 kept Pulborough pinned back and they struggled to clear their lines. Their clearance kicks were gathered by Truman and Bell and returned with interest. The increasingly desperate defence led to a yellow card and another kickable penalty which was converted by Moss for Chi to lead 11-0.

At this stage just when they should have been turning the screw and putting Pulborough out of the game, Chichester took their foot off the gas. A poor option distributing from a ruck led to the ball being lost in midfield, Pulborough hacked on and a couple of phases later went over for a try on the stroke of half time. The lead was now reduced to 11-5 and the hosts had some renewed hope.

The Coaches had some harsh words at half time as the performance was way below that of the previous game against Brighton. Those words seemed to fall on deaf ears however as Chi made a dreadful start to the second half. Several penalties were conceded in quick succession and Adlington was harshly dispatched to the sin-bin. Pulborough attacked with vigour and a chip over and chase gave them an early try which was converted and the hosts now led 12-11.

The chip and chase tactics were working and in quick succession Pulborough stretched their lead to 18-11 with a penalty and fine drop goal from their full back.

It was time for Chichester to stop the rot and up the intensity. Play moved to the Pulborough end for the first time in the second half and the Chichester forwards began to push their opponents back, the line out which had been difficult in the wind began to function and the pressure told as Pulborough lost a man to a yellow card for the second time. A quick tap penalty saw the forwards piling in and the ever busy Hockey plunged over the crucial try. Moss bagged the extras and the game was all square.

Not content with that Chichester stormed to the Pulborough end again and another penalty was won. Resisting the temptation to take a quick one this time, captain Selwood pointed to the posts and Moss again converted to put Chi back in the lead 21-18.

Pulborough game again in the last couple of minutes but stout defending kept them out and a fine pressure relieving break from Stirrup took the sting out of the game and the ref blew for time.

So a good four points for an away win but the performance left plenty of room for improvement before the cup tie against Heathfield next weekend.