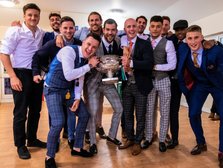 I'd like to thank all the players and supporters who turned up in honour of Brian and Mark. It was lovely to see so many people come together to show their respect for these two guys.
Ian Madgwick

Chichester City players got to lift the premier league trophy once more at their end of season awards evening.

Ben Pashley, who partnered Cody at the heart of the City defence, picked up the Players’ Player of the Year award.

Cody and Pashley were part of a back four that kept a total of 17 cleans sheets and conceded the least number of goals in the top SCFL division.

Chichester scored 107 league goals in the 2018-2019 campaign and recorded the third best goal difference in the country at Step 5.

The champions clinched the title with three games to go in a history making season featuring a run of 23 league matches unbeaten that stretched from November to the end of April. They also progressed to two cup semi-finals.

Malcolm Harwood, who has worked tirelessly at the club in a number of roles, was awarded Clubman of the Year.

Jack Moth was presented with the Players’ Player and Parents’ Player awards for the Under 18s.

Emmett Dunn, Luke Wallis, Ethan Anders and Theo Bennetts (U18s Manager’s Player of the Year) have all been involved in first team action this term.

The awards evening was followed by a veterans game at Oaklands Park the next day to honour the memory of ex-players Brian Clarke and Mark Hyde. Over thirty former Chichester City players took part in a lively match watched by a large crowd.

Ian Madgwick, the main organizer of the event, said, “I’d like to thank all the players and supporters who turned up in honour of Brian and Mark. It was lovely to see so many people come together to show their respect for these two guys. We raised over £1000 on the day for the chosen charities.”

Neil Holmes' photos from the game are available in this link