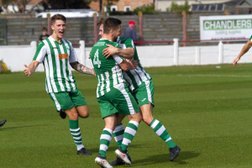 I don’t think anyone expected us to go there and get the three points – it was a great result.
Connor Cody

Chichester got off to a dream start in their Isthmian league opener.

Man of the Match Matt Axell pulled Chi level after the break with a super finish and then kept his cool from the spot in the 90th minute to give the Oaklands Park outfit the win in their first ever match at Step 4.

Afterwards Chi captain Connor Cody said, “I don’t think anyone expected us to go there and get the three points – it was a great result.

“We probably would have been satisfied with a point but midway through the second half we had the belief we could go and win it.”

Ramsgate, touted as title favourites by many, started the brighter of the two sides. Aaron Lamont, who controlled midfield for much of the first half and also caused City problems with his long throw-ins, went close with a long-range effort after sixty seconds before Rams striker Steve Smith had the ball in the back only for referee Lee Dyson to chalk it off for an infringement.

The hosts took the lead through Ollie Gray in the eighth minute after Chichester failed to clear their lines.

Mowthorpe then managed to get behind a fierce drive from Smith and claimed well when Ramsgate forced the first corner of the match after a bit of trickery from Tom Chapman.

City were under the cosh and their best moment of the first twenty minutes or so came when Lloyd Rowlatt drifted past a couple of players and dragged a shot narrowly wide.

The visitors then lost centre back Ryan Peake following a clash of heads with Smith. Cody moved across to partner Ben Pashley and Correy Heath came on at right back.

Lamont forced Mowthorpe into another save before Axell headed a Rob Hutchings’ cross just past the post.

Chi were slowly getting into the game and on the stroke of half-time Josh Clack had a shot blocked and Callum Overton got a flick on an Axel set-piece.

The home side had chances to extend their lead in the first five minutes after the break.

Smith and Chapman linked up nicely but the Rams’ No.9 fired over. Mowthorpe then intercepted a cross from Jack Morrell before bailing out Heath who underhit a back pass to him.

Both sides made changes in the 55th minute. Former Punjab United player William Johnson-Cole replaced the hosts’ goal scorer who’d picked up a knock and Gicu Iordache came on for Overton.

Lamont drove far too easily into the City box in the next attack but Pashley managed to clear his cross before the game’s momentum shifted.

Iordache started to make an impact and a well-measured pass from the Romanian found Clack who brushed the woodwork with a cross-cum-shot. Then Jamie Horncastle wasn’t far off with an effort.

Horncastle was involved in the equaliser when it came on 64 minutes. A clever flick from the midfielder sent Jones on a determined run. Jones eluded a number of defenders and squared the ball to Axell who curled in a lovely left footed shot much to the delight of the travelling fans making the 250 mile round trip.

Heartened by this Chi pressed. Clack headed a cross from Iordache just over and then combined with Jones to forge another opportunity.

Kaleem Haitham came on for Jones with 15 minutes to go and the Rams had to contend with the pace of Haitham and Iordache down both wings.

Rowlatt almost got Iordache in but his touch was a bit too heavy before Axell shot wide.
It was end to end stuff now.

Johnson-Cole certainly gave the Chi back four something to think about and Mowthorpe had to have his wits about him to punch clear a high cross. Pashley then recovered well to deny Chapman and the ball was smuggled away somehow for another Rams’ corner.

Horncastle next forced Will Godman into a fine save before Mowthorpe was in action once again before Chichester broke away in the game’s decisive moment with stoppage time looming.

A precision pass from Rowlatt picked out Haitham and Godman brought Haitham down as he nicked the ball past him. Mr Dyson, who had an excellent game, had no hesitation in pointing to the spot and Axell stepped up and smashed his penalty kick into the back of the net.

Cody added, “Kaleem is so quick on his feet. It was great to be able to bring someone like him on to affect the game. I don’t think anyone else on our team would have made that run.

“Lloyd had been getting a lot of the ball in the pocket and thankfully he came up with a great pass which obviously led to the winning goal.”

Coach Danny Potter said, “We were obviously delighted to go to Ramsgate and win. It was an impressive away performance from the boys.

“We can’t get too ahead of ourselves though. It’s just one game and Whyteleafe will be another extremely tough opponent.”

Chi entertain Whyteleafe at Oaklands Park on Tuesday 20th August (Kick Off 7:45pm) and then travel to Bridon Ropes FC on Saturday 24th August for the next round of the FA Cup (Kick Off 3pm).