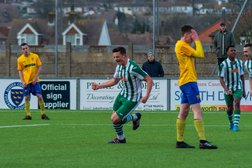 A second half goal from Canadian youngster Emmett Dunn in his first team league debut gave Chichester another 1-0 win to go ten points clear at the top of the SCFL premier division on a day when title rivals Newhaven dropped points again.

City bosses Miles Rutherford and Graeme Gee were forced to make changes after fielding the same starting XI in the most recent games against Uckfield and Eastbourne United.

Without regulars Matt Axell, Dave Herbert, George Way, Ryan Peake and top goal scorer Scott Jones, Dunn joined Rory Biggs in midfield with Ben Pashley returning to partner captain Connor Cody in the centre of the Chi defence and Sam Ndlovu employed on the other flank to Kaleem Haitham who scored late on after Jones hit a hat-trick in the 4-1 win when the sides met at Oaklands Park back in November.

Lancing stunned Chichester with a goal in sixty seconds on that occasion, but this was a match that the league leaders dominated and City had the first chance after five minutes when Haitham wasn't far off after good work from Josh Clack.

Haitham then almost set up Ndlovu before referee James Kerten had a couple of incidents to deal with after Clack was brought down under a heavy challenge and Biggs got a talking to for what appeared to be a firm but fair tackle.

Chi, who beat Pagham 4-0 in their last match at Lancing’s Culver Road ground in the RUR Cup final, seemed comfortable once again on the 3G surface and moved the ball around nicely.

Haitham and Clack linked up well in a flowing move that ended in an Ndlovu cross which was just too deep for teammates in the box.

Rob Hutchings then got down the left and whipped in a dangerous delivery that Liam Hendy turned out for a corner.

Other chances came and went for the visitors.

Clack fired a shot narrowly wide on 32 minutes when he met a pass from Gicu Iordache before, first Haitham, and then Iordache went close.

City should have gone ahead in their first attack after the break but an unmarked Cody couldn’t connect with a super cross from the mercurial Iordache.

The Romanian next picked out Pashley from a corner kick only for the defender to sweep his effort wide.

Chi broke the deadlock on the hour mark when Dunn arrived at the right time in the right place to slot home Clack’s cut-back.

Clack might have doubled the lead moments later but his powerful shot was tipped over by keeper Matt Evans.

A super diagonal pass from Pashley sent Haitham on his way. Haitham found Biggs only for the midfielder, who put in a real shift for Chi, see his goal-bound effort deflect away off a Lancing player.

Iordache then drove a shot into the side-netting and Harry Williams, on for Ndlovu, forced Evans into a save from distance.

City No.1 Ryan Young was rarely troubled but had something to think about when Lancers sub Daniel Momah laid the ball off to Finn Pittock.

The clean sheet is Chi’s third in a row and fifteenth in the premier division this season.

The table toppers’ win extends their unbeaten league run to seventeen games. Horsham YMCA, who notched a 4-1 victory at home to Arundel, replaced Newhaven in second spot with the Dockers one point behind YM in third.

City have seven matches left in their push for promotion, with three of these at home and four away. They welcome Little Common to the Countrywide Gas Services stadium in Oaklands Park next Saturday 16th March (Kick Off 3pm).