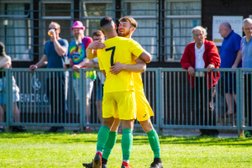 On a hot Easter weekend that smashed all sorts of records for its soaring temperatures champions Chichester City broke a few barriers of their own as they picked up a ninth consecutive premier division win, surpassed the 90 points barrier and bagged a 100th league goal.

Some eleven miles separate Chichester and Arundel but there’s eighteen places between them in the SCFL league table and the Mullets are in a real dogfight for top flight survival.

The last four encounters between the two sides have featured six goals or more so this high scoring one came as little surprise, although it wasn’t a seven goal thriller like the corresponding fixture last year when City sealed a 4-3 victory with a winner four minutes into stoppage time.

Bosses Miles Rutherford and Graeme Gee made a number of changes to the starting XI that clinched the title at home to Langney. Top goal scorer Scott Jones dropped to the bench alongside other potential supporters’ player of the year contenders Ben Pashley and Rob Hutchings, whilst Ellis Martin and Tyrell Lewis returned to left and right back duties respectively and Harry Williams got some minutes in a reorganised midfield that included former Arundel player Rory Biggs.

And it was Biggs who put Chi ahead after barely two minutes with his first goal for his new club.

City, asked not to take their foot off the gas mid-week, struggled to sustain this opening intensity and Dave Crouch pulled one back for Arundel midway through the half. A smart through ball between two defenders teed Crouch up and he beat Ryan Young with a shot the Chi keeper got a touch on.

A couple of chances came and went for the champions after the water break when Ryan Peake headed a Matt Axell free-kick narrowly off target and Josh Clack stung Dan Stevens’ gloves with a fierce drive.

The equaliser just before the break was something else as Young’s poor clearance cannoned in off an unsuspecting Ryan Hallett. It was the first time City had conceded two goals in a league match for two months.

Biggs, Chichester’s stand-out player, then almost caught Stevens out at his near post after a nice move involving Williams and Ndlovu.

A crazy five minute spell after the interval saw Chi take the lead again and Arundel miss a penalty.

First Biggs made it 3-2 and then Young, who gave the penalty away, redeemed himself getting down low to block Hallett’s spot kick. The No.11 latched on to the rebound but blazed over.

Hallett flashed another opportunity inches past the post on the hour mark before City captain Connor Cody wasn’t far off with a header.

Scott Jones and Rob Hutchings replaced Williams and Haitham and it was Hutchings who grabbed the landmark century goal following a super cross in from the right by Ndlovu with fifteen minutes to go.

Another sub, youngster Ethan Anders, capped off the latest A27 derby when he set up Clack for a header, his third in four games.

Speaking to the Chichester Observer before the match, first team coach Danny Potter said, “Although the league has been won we don’t want to stop there.

“It will be fantastic to get our hands on the trophy but we want to end with three good performances.”

Chi close out the campaign at Eastbourne Town, who are chasing second place with Horsham YMCA and Newhaven, but before that the champions will be presented with the league trophy in their final home match of the season against Pagham at the Countrywide Gas Services stadium in Oaklands Park on Easter Monday (Monday, 22nd April, Kick Off 11am).

Arundel have East Preston and Broadbridge Heath to play in their battle with Eastbourne United, Shoreham and Little Common to avoid the drop.