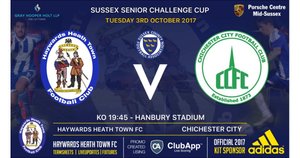 With both Heath and Chichester sitting at the top of the table it was no surprise that the game would be settled by just the one goal.

Heath progressed into the second round of the Sussex Senior Cup thanks to a solitary strike from Karly Akehurst.

In the first half both sides had chances, Luc Doherty hit the bar inside five minutes and Simon Lehkyj made a fine stop on 13 minutes.

On 25 minutes Chi keeper Ant Ender was adjudged to have fouled George Hayward in the area and Heath were awarded a penalty. Trevor McCreadie stepped up but Ender made amends going the right way and keeping the score level.

Just before the break City's number 11 Kieran Hartley picked up a yellow card which in truth seemed harsh but it was to come back and bite him later.

Five minutes into the second half Nathan Cooper stung the fingers of the visitors' keeper who touched the ball onto the bar.

Both sides pressed for the goal and it was Heath who finally broke the deadlock on 65 minutes in somewhat controversial fashion.

Joe Dryer sent in a good corner from the right that Akehurst got a touch on through a crowd of players. The goal was awarded but the visitors were incensed as they felt a hand had been used. The referee and his assistant conferred and the goal was given.

The game then opened up with Chi looking for the equaliser and Heath dangerous on the break.

Chichester were reduced to 10 men when Hartley picked up a second yellow for what seemed like an over forceful tackle on Bailie Rogers.

There were chances at both ends in the final 15 but both keepers stood firm and Heath saw the game out to progress into the second round.