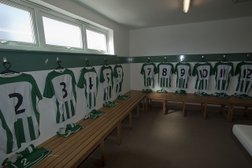 Chichester Knocked Out of FA Cup by Bearsted

A Luci Scarlat goal in time added on dumped Chi out of the FA Cup in the Kent based side’s first ever home fixture in the competition.

Whereas Bearsted had lost their first two league games of the season, Chichester came into the match on the back of an opening day defeat of bogey side Newhaven at Oaklands Park and an impressive mid-week win, hitting Hassocks for six.

Miles Rutherford’s team have a good record against Kent outfits in the runs they’ve had in the FA Vase the last two campaigns. In that 2017-2018 history making Vase run to the last sixteen, they beat Deal Town and Whitstable, who would go on to gain promotion from Bearsted’s division.

The FA Cup though has proved another proposition and a below par performance at Honey Lane resulted in an exit at this extra preliminary round of football’s oldest knock-out competition for the third season in a row.

Dan Hegarty gave the visitors a dream start though when he rose to powerfully head home a corner after barely three minutes.

Despite the early lead Chichester struggled to settle and Scarlat spurned a good opportunity for the hosts in the eighth minute when he dragged his shot wide following a mistake at the back.

Dave Herbert then got a cross off on the turn but this was gathered easily enough by Bears keeper Scott Andrews.

Chi threatened again when some super skill from summer signing Guci Iordache helped him drift past a few defenders.

At the other end Ben Pashley did well to block an effort after Ellis Martin slipped.

Martin then found George Way with a clever free-kick but the midfielder’s shot nicked off a player for a corner. Martin whipped this in towards Scott Jones and Connor Cody but neither could get a decent connection.

Scarlat and David Baranowski linked up well in a Bearsted attack down the left flank for a shot that was turned away.

Chichester then lost Martin with a groin strain on 20 minutes and replacement Steve Herbert was soon in the thick of things clearing up behind Pashley.

A wayward cross from Scarlat moments later did little to trouble Jordan Matthews before Terrell Lewis headed clear a delivery from the right by Reece Collins as the home team pressed for an equaliser.

Next Cody brought the ball out from defence, played it into the path of Jones and just headed wide when the striker found him with a probing cross into the box.

Bearsted had other chances on the half hour mark. A free-kick from Baranowski almost picked a team mate out at the back post; Scarlat wasn’t far off target with a left-footed strike and Baranowski missed a golden opportunity after Chi lost the ball and the No.10 got through one on one with Matthews.

Dave Herbert and Way then both had efforts blocked after good work from Iordache.

The home side forced three corners in quick succession just before the break and Pashley was in the right place at the right time to head one of these away from under his crossbar.

Five minutes into the second half Tiago Andrade threaded the ball through to Jones who cut inside, only for a defender to get in a timely tackle.

The all-important second goal wouldn’t come for the visitors who couldn’t find the kind of characteristic intensity of recent matches and they paid the price on 56 minutes when a low shot from Baranowski squirmed under Matthews to make it 1-1.

Bearsted might have taken the lead a couple of minutes later as Scarlat, who gave Lewis a torrid time down the left, had an effort palmed away by Matthews.

Both teams then had goals disallowed for offside before Herbert saw an effort blocked after nice play from Iordache.

There was a hotly disputed penalty appeal turned down by the referee for the Bears and then Matt Garner crashed a header against the bar.

Both Rutherford and Bearsted manager Kevin Stevens made changes. Rob Hutchings and Kaleem Haitham were introduced for Chichester upfront in a bid to find a winner.

With seven minutes to go Way picked out Haitham on the right but his cross was turned out for a corner. Hegarty then got on the end of another corner but was off target this time.

Bears sub Peter Williams then headed over a good chance at the other end.

And just when it seemed a replay was on the cards Scarlat broke Chi hearts in the 93rd minute with a neat finish.

So the FA Cup is over at the first stage for another year. Chichester turn their attention to the premier league as they host Horsham YMCA on Saturday (Kick Off 3pm) and Broadbridge Heath next Tuesday (Kick Off 7:45pm).