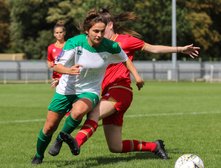 After a stormy morning in Chichester the sun came out for the ladies first home league game of the season.

The team started well and were keeping the ball trying to force some pressure on their opponents. Captain Megan Fox shooting just over the bar from 30 yards. After 20 minutes or so MK Dons started to take a foot hold on the game and when their striker got into the box the Chichester defence were unable to clear and she poked the ball into the bottom corner via a deflection to make it 0-1 to the opposition. Chichester’s heads dropped and it were second to the ball at times, leaving the defence with a lot of work to do, only having opportunities on the counter attack with Tash Wild causing problems with her pace up front. It was MK Dons who scored again before the break when a mistake at the back, saw Poppy Shine give the ball to the MK Dons winger who smashed it into the open goal for 0-2.

Chichester manager and coaching team made a change at half time which saw Lucy Cook replace Rachel Jarvis on the wing. Lucy got straight into the game and taking it to MK Dons. Her ball into Amy Martins up front saw the Chichester striker fouled for a penalty, 6 minutes into the second half. Fox put the ball down and tried to find the bottom corner but the MK Dons keeper was equal to it and saved, keeping the game at 0-2. Chichester were getting back into the game and had a few more opportunities before MK Dons made it 0-3 with a sweeping move from the back that was eventually tapped home and the far post by their winger with 20 minutes to go. Chichester continued to try and probe but to no avail.
With a new look squad and a lot of First Team debutants it seemed to be a day of nerves and a learning experience from the young squad. Back to the training ground this week ready for their cup game on Sunday vs Cambridge City KO 2pm at Oaklands. Entry £4, U16s £1, Sponsors free entry.