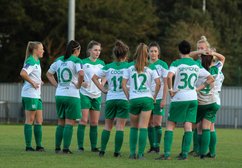 Chichester City Ladies will have a new home ground for the rest of the season and assure this is a step in the right direction for women's football.

The time has come for Chichester City Ladies to part ways from Oakland’s Park after many years at the ground. Their last home game has been played and they would like to thank the main club for allowing them to use the pitch for previous years.
The club have decided it is time to move on to other opportunities to continue to progress women’s and girls football across West Sussex. Currently all 7 Chi City Ladies and Girls teams play in different locations which makes it difficult to have the desired ‘one club feel’. The club has a lot to offer with youth players continuously looking up to the senior players in the squad which made the decision easy for the committee to make this move.

After an abundance of change from the previous season that took a lot of time and energy away from playing football, there has been unrest from the beginning of the season at Oakland’s Park and it doesn’t feel like home anymore to the club. Company director Caz Henry-Evans has held this club together, alongside Vice-Chair Sam Ashton and the rest of the committee and they have no plans to go anywhere any time soon.

It has been an unfortunate start to the season for the green and white army in the FAWNL campaign. However, first team manager Sadie Blakely has managed to find a talented young passionate squad who are showing great signs of exceptional football with a near home game win against top-of-the-league Watford. Blakely also has a team of UEFA A to Level 2 qualified coaches and backroom staff to support her first post as a manager who are all going above and beyond to run the club to a high standard.

They will still remain as Chichester City Ladies and Girls FC, play in the FAWNL Southern Premier Division and in their green and white strip. The only change will be a new home ground that want to help progress women’s football in the local area.
This is an exciting move for everyone involved in the club as all youth and senior teams will train and play games in the same place allowing for players and fans to easily watch other Chi City games on the same day. All money that is spent in the ground on game days will feed straight back into the club to invest in more opportunities for women’s and girls football in the future.

The club cannot wait to move and will soon host their first home game at their new ground.

A further press release will follow in due course with more information about the new home for Chichester City Ladies and Girls FC and their next home game will be against Ipswich in the FA Women’s Cup on 1st December 2019.

There are plenty of sponsoring opportunities available to those who want to get involved with women’s and girls football, either get in touch with secretary@chichesterladiesfootball.co.uk or look at the commercial opportunities document.