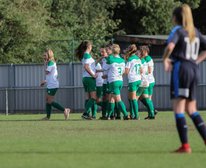 PREVIEW| Road to the Final

The green and white army have faced a hard-hitting season in the FA Women’s National League, the UK’s third tier league in Women’s Football, having an average aged team of 21 years old. However, the reigning champions are keen to retain their crown on Thursday night and be the queens of Sussex for the third time in 5 years.

First team manager Sadie Blakeley has won the Sussex Cup as a player with City and is looking to replicate this win in her first season as manager. Blakeley said “It’s massive for everyone at the club, especially for the players we have this season as we have been through a lot on and off the pitch.”

Crawley were tough competition for Blakeley’s young side at the beginning of the season: “Crawley will be a very hard test. They are having a very good campaign this year with some very experienced players. This is clearly shown by them being top of the league at the moment and looking a very good bet to win it.”

Road to the final