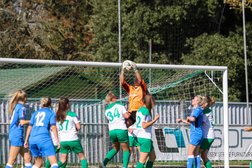 An energetic second half performance from Chi wasn’t enough to comeback from Cardiff’s 2 goal lead.

The hosts invited a lot of pressure on themselves in the first half as Cardiff had very attacking phases of play. City’s defensive back line were tested plenty of times but were kept in the game by centre-half Sophie Phelps.
A great solo goal by Cardiff’s Grace Horell who carried the ball from midfield to slot it into the bottom corner put them ahead just before half-time.

Chi came back fighting during the second half with the energy led by substitution Nicky Lake and Captain Megan Fox being moved up front. A few long range efforts from the Skipper’s favourite distance sailed over the bar.

Despite Chi’s best efforts and positive attacking performance, Cardiff scored their second and sealed the win.

Last minute substitutions Loulou Robson and Gemma Staple were brought on to strengthen the midfield and keep up the momentum. Staple nearly opened the scoring for Chichester on her debut with great determination and work rate with Webster up front in the final 10 minutes.

The final whistle blew with Cardiff winning 2-0 but another positive and improved performance for Chichester City Ladies.