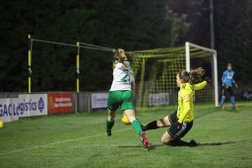 Having lost to Crawley Wasps a week earlier in the SCFA Challenge Cup Final and seen hopes of reaching the FAWNL Plate semi final dashed by Watford at the weekend, Chichester made the journey to East Grinstead Town’s East Court ground for a second clash under the lights, this time with league thoughts firmly on the mind of the green and whites as they looked to kick start a surge away from the bottom of the table.
In front of an enthusiastic crowd, on a chilly evening, Chichester made a bright start to the game with good pace from the likes of Rebecca Bell and the restored Tash Wild causing the wasps some trials and tribulations at the back. Gemma Simmonds had the first crack on goal when afforded time to have a go from distance but her effort went, agonizingly, over the bar.

Crawley were having difficulty settling into the tie, on a difficult pitch, but, slowly, began to find their feet with Charlotte Owen set up by Tash Stephens to have a crack at goal and only just going over the bar with keeper, Issy Foster well beaten. Chichester didn’t let that affect them and went even closer to breaking the deadlock close to the half hour when Simmonds was again in the right place to fire goal ward only for Frankie Gibbs to make a good save to deny her.

Right on half time and the pressure from the yellow finally drew reward when Chichester, for once, failed to deal with a corner. This time Kemina Webber, somehow, managed to turn in the box and fire low past Forster despite being within a crowd of players. The lead was greeted with a sumptuous roar from the home support and was largely merited on the first half performance but Chichester certainly weren’t done by any means.

The wasps made a bright start to the second period and had Chichester wobbling at times by the rearguard held firm meaning that the visitors were still not out of the tie. Time and again they tried to find the perfect ball over the top but it just wasn’t falling for them when they needed it. They did force some corners late on but failed to make anything of them and a relieved Crawley side were left to celebrate at the final whistle to further increase their lead at the top of the table and Chichester to rue the opportunity they had to set the record straight following the cup final defeat.

With the home tie against Oxford postponed at the weekend the Chichester ladies will have to wait a little longer to try and put things right but must be wholly credited for the performances over the three games in six, pulsating, days and the excellent management of the squad by Sadie Blakely, so the rest will certainly come in handy before they next take to the pitch.