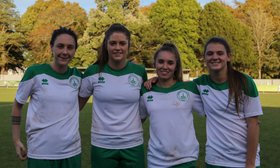 REPORT | Extra time helps Chi through to round 2

The first round of the FAWNL Plate as Chichester take on Swindon at Oakland’s Park and achieve their first home win of the season.

There were four changes to the line-up from their loss against Portsmouth in the league on Wednesday with Eichhorst, Martins, Shine and Simmonds all in the starring 11.

A dominating performance from Chichester with plenty of chances on goal couldn’t stop Swindon opening the score just before half time.

Losing momentum going into the second half, the greens continued to invite pressure from Swindon.

On the 60th minute, super subs Cook and Staple brought a lot of energy onto the pitch and a change of pace to the game. Cook caused a lot of trouble for Swindon’s defence and a great addition to Chi’s attacking phases of play.

Within the first four minutes of the substitutions helped Chichester level the game with Wild scoring a looping shot over Swindon’s keeper from the edge of the box.

Moments later, Simmonds regained possession and took advantage of the keeper being out of position to slot the ball bottom corner from 25-yards out to give Chi the lead for the first time in the game.

The greens maintained the majority of possession but a questionable decision from the officials 2 minutes before full time gave Swindon a free kick and an opportunity to take the game to extra time.

Shortly into extra time it became clear that Chi’s fitness would dominate Swindon, Blakeley’s side took the lead with Staple calmly scoring in the top corner after a great build up play from Wild and Fox.

Fox’s famous corner delivery led to another signature goal from Phelps to make it 4-2 and seal the win to round 2 of the FAWNL plate.

An excellent all-round performance from Chichester and their first home win of the season.