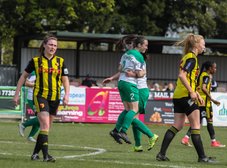 Lauren Cheshire’s penalty was the difference as the end of an era came for Chichester City in the 1-0 win over Watford on Sunday in the FA Women’s National League.

While emotions ran high for Matt Wright’s final home game the team put in a performance worthy of the 11 years served by the Chichester coach.

In the 40th minute Kim Stenning was fouled in the box and the captain, Cheshire, coolly smashed home the only goal of the game.

Heading into the game Watford were the last side in the league that Chi had yet to beat with the reverse fixture seeing the Golden Girls take the points in a 1-0 win.

The two sides stood for a guard of honour ahead of kick-off as Mr Chichester City Ladies, Matt Wright, stepped out one last time as a coach and volunteer.

Chi started quickly and within the first minute Molly Clark was denied by the post before the Watford goalkeeper, Weronika Baranowska stopped a second shot from the midfielder.

Chances started to come thick and fast for Chi, M.Clark put a couple of shots over from range while Stenning was caught offside for Tammy Waine’s flicked on pass.

Watford’s Leanne Bell made a break down the right tipping the ball over the tracking Waine but Nadine Bazan pressured her into putting the shot wide.

Both sides were using the physicality in the match as the midfields went toe-to-toe.

Chi’s high press was well initiated by Helen Ogle and she managed to nick the ball from the feet of Georgie Edwards only to drag her shot wide.

The visitor’s looked for the quick counter from the press and their danger came from Adekite Fatuga-Dada however, Cheshire kept pace to delay the attacker’s advances.

Down the other end, Lewry and Stenning both had half chances that Baranowska claimed.

Samantha Hallsworth and Andrea Carid Cao created opportunities for Watford but were stopped by the resilient Chi defence.

Lewry controlled a M.Clark cross well but failed to hit the target as the deadlock remained unbroken.

38 minutes played and Chi were given the chance to go ahead.

Stenning awaited to head in a M.Clark cross however, the striker was adjudged by all the officials to have been pushed by Hattie Kettle and the referee pointed to the spot.

Captain calm, Cheshire, took hold of the ball and set herself for the spot kick.

While Baranowska dived the right way, she was never stopping the power of Cheshire’s penalty that fired into the top corner five minutes from the break.

Chi had the stronger start in the second-half continuing to cause the Hornets problems, Lewry had two chances to double the lead but neither quite found it’s intended target.

Ogle found herself one-on-one with Baranowska but lacks pace on the shot as the Watford keeper kept the winger out.

Cheshire was on call to regular delaying the quick counter through Fatuga-Dada, frustrating the visitors in their search of an equaliser.

Attacking chances were created by both but the visitor’s efforts were snuffed out quickly as Lauren Dolbear remained relatively unchallenged while M.Clark just curled a shot past the top corner.

Substitute Tash Stephens set up Ogle inside the box, her shot was deflected out and somehow Watford managed to keep the ball out of their goal from the resulting corner.

As normal time came to an end the officials confirmed eight minutes of injury-time.

With little to do most of the game, Dolbear was quick to clear her lines as Waine’s headed clearance fell behind her.

Watford tried to regain possession and launch a final effort to stretch the Chi backline however, Tiff Taylor denied the chance.

The final whistle came and a 1-0 victory for Chi against Watford moving them back into second place as Cardiff City lost to the newly crowned Champions Coventry United.