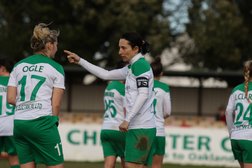 Despite a late red card, Chi kept QPR at bay winning 3-0 to confirm third place in the league.

Tammy Waine ticked off a couple more accomplishments as the former striker defended, assisted and scored before stepping between the sticks in Chichester City’s 3-0 win over Queens Park Rangers.

Tash Stephens had opened the scoring in the first minute before Lauren Cheshire added a second while Waine slotted home from the penalty spot in the first-half.

QPR came back at Chi in the second-half but only found the crossbar there was hope when Lauren Dolbear was sent off with 10 minutes to go, Waine putting on the gloves, however, the Hoops couldn’t even find a consolation.

The final home game and the penultimate match of the season for Chichester City saw QPR travel south a team with only one win in the FA Women’s National League Southern Premier.

A few changes were made to the starting line-up a Laura Ingram, Helen Ogle and Gemma Simmonds were called upon.

Chi flew out the traps against the Hoops and won an early corner as Stephens’ cross was headed clear.

Waine headed the ball at goal but it was cleared off the line but not convincingly with Stephens nonchalantly tapping home still within the first minute.

It was a fast start and the match continued that way the visitors winning a couple of free-kicks but unable to create much with the best, a Danielle Puddefoot set piece, being saved by Dolbear.

Ogle had a free-kick that just went over the crossbar which was followed by a great effort by Lewry on the turn in the box, Gillian Kasirye claiming.

Both sides created opportunities however, the visitors were denied by the defence while Chi’s shots missed their intended target until a drive from Lewry was put out by Amanda Chimbima.

From the corner captain, Cheshire made it two, a glorious ball that floated from the corner over Kasirye, too far forward, to nestle into the bottom of the net.

Stephens and Lewry nearly made it three with efforts of their own but it would be from the penalty spot that Chi would find the third.

On the edge of the area, Anya Kinnane challenged Stephens from behind and the referee pointed straight to the spot.

Without a goal all season it was Waine who was given the green light to take and the former Brighton and Lewes player sent Kasirye the wrong way to coolly slot in.

A great first-half for Chi and the second 45 started just as well for the home side.

Ingram had a header cleared off the line as Lewry got on the end of the rebound which Stephens tried to deflect in but QPR managed to force a corner.

The visitors grew into the game Kasha Petit found the speed to run in behind but her volleyed shot found the side netting.

Tiff Taylor, Dolbear and Cheshire denied opportunities for the threatening Courtnay Ward-Chambers before a long ball from Waine ended in a one-on-one for Lewry who just couldn’t beat Kasirye.

Katie Knell went closest for the Hoops driving inside to find space to shoot beating Dolbear but finding the crossbar in her path of a goal back.

QPR had elements of a threat and Chimbima looked to be causing trouble as she drove past three Chi players only for Waine to keep the midfielder out, smashing the ball out of dangers way.

With 78 minutes on the clock, there was late drama as Dolbear claimed the ball outside her area with the visitors trying to pick out Petit on the long ball.

A free-kick was given and following a discussion between the officials the Chi goalkeeper was sent off.

Goalscorer Waine stepping up to go in between the sticks for the remainder of the game, her first task defending the set piece.

Puddefoot, sensing a chance for QPR, hitting the free-kick straight finding a confident Waine who claimed the ball and maintaining the clean sheet.

While the visitors had the extra player they couldn’t make it count even to get a consolation goal as Chi saw the game through.

With the final whistle is brought a fourth consecutive win, third consecutive clean sheet, three more points and a cemented third place finish in the league.