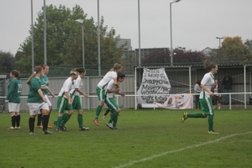 Chichester City played Rottingdean in the Sussex Cup First Round in what turned out to be an eventful afternoon at Oaklands Park.

Chichester started the game slowly but soon found their shooting boots by having numerous shots in close succession! Against the run of play Widdowson was cautioned for a late tackle on a slippery pitch and the resulting free kick led to a shock goal for Rottingdean after 9 minutes.

Rottingdean then took a surprise 2-0 lead as Chichester were caught in possession leaving McNamara with no protection in front of her.

The Lillywhites were patient in their approach though and pulled a goal back through Challen (15) after Wride played a perfect pass through the Rottingdean defence.

Chichester were starting to dominate in possession and were soon level when Shrubb put the ball in the back of the net only for it to be ruled out for offside. The equaliser came after 24 minutes when Challen lobbed the keeper brilliantly from the edge of the box to score her second of the afternoon.

Shrubb won a penalty after a run down the left only for Starkey to miss it. A long ball from Widdowson was fumbled by the Rottingdean defence and Challen rounded the keeper for her hat-trick (29).

Shrubb played Challen through for her fourth of the afternoon a minute later after lobbing the keeper again. A brilliant run from Shrubb should have brought a fifth only for her to pull it wide of the near post, and another over the bar. Another Shrubb run forced a good save from the Rottingdean keeper. Chichester lead 4-2 at half time!

Rottingdean started the second half with renewed confidence but were soon deflated after Challen turned the defender and forced a corner. The resulting corner was headed in after Widdowson climbed highest in the box to make it 5-2 (50). Danni Paul came on for Hughes-Jones (53) with the game seemingly already won. Rottingdean were rattled and constantly fouling the Chichester players. The difference in class showed and the Lillywhites were making the most of the lack of fitness in the Rottingdean players.

Richardson was having a good game in the centre of the park and linking well with Widdowson. Evans won a penalty in the 57th minute with Starkey putting aside her earlier miss to convert in the bottom left corner! Widdowson cleverly played in Wride who played a ball invitingly to the back post, with the goal gaping wide open and seemingly impossible to miss, Shrubb did just that and put the ball wide of the post.

After a shakey start the Chichester back four were playing the ball round brilliantly only for Alexandre to go on a run and lose the ball, Alexandre recovered brilliantly from her mistake to stop a rare Rottigdean attack with an excellent goal saving tackle 20 yards out.

Lizzy Ogden came off the bench for Widdowson in the 65th minute. Challen was booked for a late tackle although it was clear for everyone to see that she did not touch the player. Selby came on for the very impressive Challen (71) soon after. Chichester were playing the ball round well and soon stretched their lead further after Selby was brought down in the box with a horrendous tackle. Starkey stepped up again, missed again, but followed up to make it 2 for the afternoon for her (75).

Shrubb finally scoring after making a mockery of the Rottingdean defence! Evans and a Shrubb double followed in quick succession. Wride finished from an acute angle to make it 12-2 with 6 minutes to go. Shrubb should have made it 13 after an excellent run and through ball from Paul. Selby, Ogden and Evans went close late but the score line remained the same.