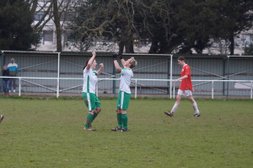 Chichester City Ladies have been hampered all season with the weather conditions so were desperate to ensure this weekend's clash with MK Dons Ladies went ahead regardless of the numerous cancellations up and down the country.

Off the back of a 5-2 victory against Luton Town Ladies Chichester had managed to find their winning ways once more in the third tier of English football. The Dons started the better of the two sides and dominated possession in the first half. For all of their efforts MK Dons struggled to create many goal scoring opportunities with Chi Ladies looking strong defensively but couldn't string more than two passes together when they had the ball.

On 43 minutes the Dons pressure paid off as they managed to slot the ball home neatly from a sloppy mistake in the Chi defence.

This truly was a game of two halves as Chichester Ladies came out fighting, having found their passing ways it was now all pressure on the MK goal. Neat link up play between Fowlie and Wride saw lots possession in behind the MK right back and several crosses were finding their way into the box where Challen came close on several occassions.

On 76 minutes the dynamic Widdowson found herself in space on the edge of the box and drove a shot low and hard, the keeper managed to save the effort but the ever present Willett followed up to tap the equaliser home. Willett, having recently lost a close member of her family, stated 'that one was for Mr Gregory'. Chichester continued to push forward and MK Dons also broke and threatened once again.

The entertaining match finished 1-1 and Chichester will host Ebbsfleet next week at Oaklands @ 1500hrs, all support would be welcome!