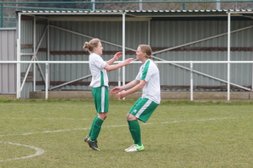 Up to 2nd in the league.

Chichester City Ladies beat Ebbsfleet United 2-0 in a scrappy match @ Oaklands Park this Sunday. With many players absent Chi called upon reserves for this match. Manager Matt Wright stated 'We work hard to develop players througout all of our teams so on occassions like this we have the quality that can step up and produce top level football when we ask them to'.

Chichester have started slowly in their last two matches and have had to fight back from behind, this week they stamped their authority from the whistle. Widdowson and Madden found space well that allowed the ball to be moved from the back line to the attacking players and Ambler tested the Ebbsfleet back line with penatrating runs.

For all of their first half dominance Chi failed to capitalise and rarely threatened their opponents goal. The second half brought the introduction of Selby and Ogden, the impact was instant as Ogden slotted home after just 30 seconds with her first touch.

Chichester continued to work well with Challen being denied on several occassions by an outstanding Ebbsfleet keeper. In the closing stages of the match the game opened up and Ebbsfleet started to close in on an equaliser. The brilliant Hughes-Jones and McGlashan denied any attacks and soon Wride found herself in space yet again in the middle of the park, a neat ball through to saw Challen's first shot saved but she followed up to secure the 2-0 victory. This lifts Chi Ladies to second in the league. Chichester face Enfield next Sunday @ Oaklands @1400hrs.