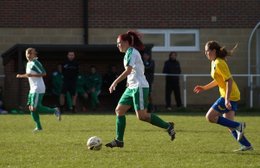 Sunday the 3rd of November saw the start of Chichester City Ladies FA cup campaign. Chichester entered the competition at the 3rd qualifying stage knowing a win would see them in the first round proper. AFC Wimbledon’s development squad were the opponents after winning in their previous two qualifying rounds, meaning they had progressed further in the competition than their first team counterparts. Having had such a fine run of results in the league Chichester were keen not to be on the wrong end of a cup upset in this game.

Chichester started the game slowly and were put under pressure by the ‘dons attacking players for the first 10 minutes of the game however they were unable to get past Chichester’s back line. As the half went on Chichester started to grow into the game and began to cause problems with the pace of their attacks. The team were now beginning to find their forward players in space in behind the opponents defence and one on one with the ‘keeper the only thing missing was a finishing touch. It was beginning to look like a frustrating afternoon for Chichester.

The deadlock was finally broken on 18 minutes when a Chichester corner was not cleared and Lauren Cheshire put the ball in the net with a volley over the top of her head. After the restart Chichester continued their dominance and created several goal scoring opportunities from both forward players and midfielders again the only thing missing was the finish. With the amount of chances being created by Chichester it was only a matter of time before the second goal came, Cheshire again came up with the goods scoring a fine volley with the outside of her boot after some excellent build up play throughout the Chichester midfield.

Ambler, who was working tirelessly upfront, then had several chances to get on the score sheet herself but a combination of good goalkeeping and strong defending kept her at bay. On 37 minutes Ambler eventually got her reward for her efforts when she slotted the ball past the keeper after a precision through ball from the centre of midfield. Chichester went in at the break 3-0 up and were looking to build upon the fine attacking football they had shown in the first half.

The second half began much as the first half had ended with Chichester enjoying the lion’s share of possession in the Wimbledon half. Fowlie and Wride built on impressive first half displays in the middle and were combining well to create chances for the Chichester forwards. The fourth goal again came from Ambler with a great strike from the edge of the area that flew into the top right hand corner. Cheshire and Ambler soon completed their hat tricks and put Chichester 6-0 up.

With Chichester six in front there was still no sign of them taking their foot off the gas. Starkey, a substitute for the impressive Symonds, scored Chichester’s seventh with a fine individual effort, starting a run in her own half past several opponents and coolly placing the ball into the bottom corner of the net. t was then left to Ambler to get her fourth and Chichester’s eighth with a fierce shot from the right hand side, clipping the post as it went in. A fine Chichester performance and one that sees them into the next round of the FA cup where they will face Gloucester city ladies at home on December the 1st. The team are back to league duty this weekend and travel to the IOW to face Shanklin.