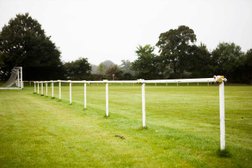 Ladies book their place in the Sussex County Cup Final.

On Sunday Chichester City Ladies booked their place in the Sussex Cup final for the second consecutive season after defeating Seahaven Harriers at a packed Oaklands Park. As defending Champions Chichester were keen to start the game fast against a team ranked below them in the football pyramid but the heavy pitch and a fine defensive performance from Seahaven proved a tougher challenge than was predicted.Chichester entered the pitch in front of over 100 fans sporting in their green and white strip that has once again been sponsored by The Owen Kenny Partnership.

The local firm who specialise in conveyancing and family law made the decision to support local community projects rather than investing in a large marketing campaign. They have now entered their third season of sponsoring the team and the ladies proudly wear both home and away shirts with their logo.Seahaven started brightly through a fine passing move that penetrated deep into the Chichester half which led to an early corner for the visitors.

Chichester defended well and cleared their lines consequently this proved to be Seahaven’s best chance in the first half. Chichester then asserted themselves on the match and a plethora of chance ensued. Woman of the match, Lucie Challen, came closest with a fine diving header followed be some close range efforts which the Seahaven keeper denied. After having a goal disallowed for offside it seemed the break through would never come.

Then on the 44th minute debutant Rachel Waller unleashed a fine effort from outside the box into the top right corner.The second half became a more open affair which suited Chichester as they started to exploit the space. Captain Alexandre dominated the back line with Cheshire and Dowdell were proving too much for Seahaven to cope with on the right flank. A swift passing move soon led to yet another cross reaching the box, the Chichester College duo Jess Pike and Chloe Dowdell linked well as Pike looped a ball to the back post for Dowdell to head home. After many threats from Baron corners Cheshire soon converted an effort to take the goal tally to three, the full back then got her brace after slotting a penalty home.

The ever present centre midfielder Challen tested the Seahaven keeper several times from range in the latter stages of the game and only the wood work could prevent her from scoring a well deserved goal. Just before the final whistle Seahaven had their best chance with a sliding effort on the back post, but a goal evaded the lunging player. Chichester ran out 4-0 winners and will now face Brighton Ladies in a replay of last season’s final.