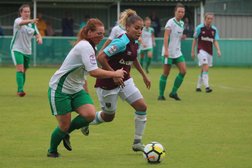 Chichester off the mark as cup adventure begins

Chichester City Ladies finally secured their first win of the season, this week, as West Ham Ladies were on the receiving end of a wonderful performance by manager, Matt Wright’s charges as they swept into the next round of the FA Women’s Premier League Cup leaving the hammers to reflect on a bad day at the office.

The match started quickly with both teams looking to gain an early advantage over the other if they could. Chichester welcomed Jade ‘Chucky’ Widdows back to the fold for her first outing of the season and fellow newby, Chloe Tucker started on the bench for the home side but did end up getting on far sooner than had probably been envisaged during the first half. Chichester enjoyed a large portion of possession but the claret and blue defence held firm, until that is, just on the quarter hour when the green and whites deservedly got their noses in front through the ever present Jess Lewry.

The hosts were pressing hard and the ball fell kindly at the feet of Lewry who struck from all of twenty yards leaving keeper, Lottie Ivison routed to the spot to the delight of the home fans and Lewry’s green army teammates. This gave Chichester a big boost in confidence, something that had largely eluded them in their first two outings this term, however the elation was tinged with worry a few minutes later when Lucie Challen was forced off with what looked like a concerning knee injury. Tucker took her chance from the bench to slot alongside Tiffany Taylor and Laura Ingram in defence and Chichester looked really solid after that.

The Clarets, meanwhile, were struggling to find any consistency to their play and goal keeper, Sadie Wilson-Blakely, was a very much a spectator for Chichester as the half wore on. On the other side of the coin the West Ham keeper was being well tested by the hosts who had several excellent chances to add to their lead around the half hour. Both Charley Wilson-Blakely and Cherelle Khassal were the beneficiaries of some wayward play by the visitors but a combination of Ivison and the likes of Jasmine Auguste and Chenise Austin did their bit, superbly, to keep Chichester out and eventually go into the break only one goal behind.

To many the second half promised more goals and, although taking some time to materialise, the home fans were rewarded by some excellent finishing to eventually seal the win and safe passage to the next round. Firstly, on the hour, Tucker launched a free kick into the danger area and Lewry pounced to flick a header over the advancing Ivison and into the back of the net to give Chichester the important two goal cushion.

The hammers then woke up, surging forward on the repost, and forced a good save from the Chichester keeper but then their hopes were dealt a big blow when the impressive, Charlotte Long was shown red for a second bookable offence leaving the visitors to play the final quarter with only ten players on the pitch. Ironically they didn’t let their heads drop and with around four minutes remaining got themselves back into the tie when Chloe Burr raced through and then produced an exquisite chip over Wilson-Blakely into the Chichester net to give the clarets hope but, from the restart Chichester immediately went down the other end and Khassal smashed in a terrific shot from the edge of the box to restore the hosts two goal lead.

The best was left till last when, in injury time, Tucker launched another, typically dangerous free kick into the West Ham box, but the effort, instead, curled and flew over Ivison’s head and into the far corner off the post. This was a goal well deserved for the debutant and much can also be said for Alex Collingham who came on for her late debut and showed real signs of quality in her short time on the hallowed turf at Oaklands Park.

Following the final whistle the news filtered through that the injury to Challen was not as serious as first thought and that should only mean a short spell on the sidelines before coming back into the team which will be of great relief to everyone at the club. Chichester resume league aspirations next week with the sizeable journey to Cardiff City Ladies and the definite wish to gain revenge following their defeat their last season, ironically, in the league cup.