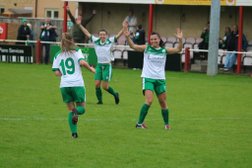 Chichester City Ladies survived a real scare, this week, as Swindon Town Ladies almost completed a remarkable comeback only to concede late on to enable the green army to come away relieved and with the three points in the bag from their trip to Cinder Lane in the FA Women’s Premier Southern division.

Chichester started very brightly, against a young Swindon side, but it was the hosts who were to get the first effort that saw Sophie Barrett fire in a free kick from distance but Sadie Wilson-Blakely had it covered to prevent an early shock for the visitors. Chichester grew in confidence after that and started passing the ball round beautifully, Ellis Bloomfield particularly looking excellent in her midfield role, working spaces and starting to boss the game and the feeling amongst the healthy travelling support was that a goal would come sooner rather than later to settle any nerves and, just after the quarter hour the experience of the Chichester side finally told as they got their noses in front from a most reliable source.

Lauren Cheshire fired in a corner from the right and Charley Wilson-Blakely rose strongly to head home near the back post to open the scoring in typical striker’s fashion. A short time later and with almost half an hour gone the green army doubled their lead with the excellent Holly Wride grabbing her first goal of the season that has seen the returning Chichester player having to overcome a knee injury to get back to the starting line up so it was great to see her break her duck for the season. Again Cheshire was the provider with a low, driven, corner and Wride met it sweetly with a first time effort into the bottom corner with keeper, Emily Baggueley well beaten.

The visitors continued to press forward and Jess Lewry was very unlucky not to score when a scorching effort, from distance, produced a spectacular save from Baggueley onto the bar to keep effort out. Before long, Chichester had a third strike to celebrate and this time Wilson-Blakely made it all her own. Finding herself in acres of space the striker unleashed and unstoppable drive from fully thirty yards that went like a rocket into the roof of the net with Baggueley rooted to the spot. With the visitors in full flight Khassal then added a fourth goal to the tally. Put through on goal she made no mistake, one on one, and slid the ball effortlessly past Baggueley to inflict further damage to the already beleaguered defence.

To their great credit the reds kept on battling and did have the last word of an absorbing first half when Annie Martin was the beneficiary of a contentious decision when seemingly offside to poke in but the referee, Lisa Benn, allowed the goal to stand and the hosts had something to cheer going into the interval. However just a few minutes had elapsed after the break when Wilson-Blakely netted her hat-trick to make many believe that the tie was over as a contest. This time Wilson-Blakely finished smoothly at the near post from a delightful cross from Khassal with the home defence again split wide open.

Following the hour mark, and with Chichester in full command of the tie the swingometer suddenly and inexplicably turned towards the hosts as the green army suffered a seismic wobble to allow their hosts back into the tie in dramatic fashion. First Mia Mugford attempted a shot on goal and the ball took a huge deflection and looped over the despairing dive of Sadie Wilson-Blakely and into the back of the net.

With Chichester momentarily shaken Swindon piled forward and a short time later had another goal back when Wride saw an attempted clearance hit Mugford and ricochet back past the Chichester keeper and into the back of the net. Swindon tails were firmly up and there was now a look of anguish in the Chichester dugout. Next Swindon were awarded a hotly disputed penalty which the impressive Barrett slotted home and now there was real hope that the hosts could pull off the great escape but, thankfully, Chichester rediscovered their touch in the dying minutes to finally shrug off Swindon and seal a relieving three points.

Firstly sixteen year old substitute, Alex Collingham, was put in on goal by the unselfish Khassal and, despite the onrushing Baggueley, showed great maturity to slide the ball under the keeper and into the back of the net to send the travelling support into raptures. Then, in injury time Collingham returned the favour to Khassal and her teammate did the rest with a quality finish to finally nail the win for the visitors. Next week Chichester will make the trip eastward to Lewes and will hope to seek revenge for last weeks’ demise at Oaklands as the season continues to heat up for the green army.