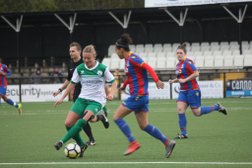 A Gemma Bryan hat-trick left Chichester to reflect on more away day pain as they came away from Crystal Palace pointless with a frustrating 4-1 defeat at Bromley FC.

The Eagles took a two-goal lead into the break Bryan with the opener and Nikita Whinnett with a superb strike that beat Sadie Wilson-Blakely, Chichester weren’t without their chances and reshuffled in the second-half.

Two second-half Bryan penalties sealed the points, Cherelle Khassal did find a goal before Palace netted their fourth but it wasn’t enough.

Both teams and their supporters respected a minutes silence for Armistice Day with the game soon starting with Khassal playing the lone role as Charley Wilson-Blakely remains sidelined.

Goalkeeper S.Wilson-Blakely returned to the side for the tie, with Jade Widdows making up a strong bench for the visitors.

The match took a while to get going with both sides testing each other out and very few clear-cut chances to speak of in the first quarter hour.

Holly Wride went gone close for the visitors volleying over from just yards out after some excellent work from Khassal.

With 20 minutes on the clock, Bryan netted her first of the match to break the deadlock with a sublime finish from the edge of the area having been found with a lovely touch by Ellie Bailes.
Despite the setback, Chichester founds the gaps to carve out their own chances.

Jess Lewry was a constant threat with searing pace and determination to win the ball at every turn.

On the wings, Lauren Cheshire and Tiffany Taylor also did their level best to work opportunities with the final balls just failing to find a player in the box.

Chichester looked likely they were close to knocking on Palace’s door until a quick break from the hosts saw Whinnett in on goal.

The former Spurs striker was put through on goal and slotted with a calm finish to double the hosts advantage.

Right on half-time Chichester had another close call and again it was Khassal who was at the heart of it.

Some great inter-passing from Gemma Simmonds allowed Khassal to dart through on goal but her resulting effort lacked power.

Palace pressed on after the restart and the ever-dangerous Whinnet came close with a curling effort.

The game then looked to be sealed when S.Wilson-Blakely brought down Bryan inside the box as the keeper rushed out to deny another attack.

From the 12-yard spot, the inform striker coolly sent the Chichester keeper the wrong way to making it 3-0 with 18 minutes left.

Chichester never gave up and their determination finally paid off when Khassal converted at the far post from a lovely low cross from Cheshire.

However, minutes later joy turned to despair as Wilson-Blakely again brought down Bryan for a second spot-kick that was duly dispatched by the striker for her hat-trick.