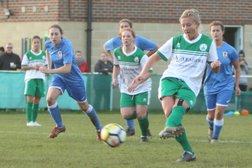 Chichester search for winning feeling goes on as Cardiff snatch a share of the spoils.

A late goal from Kelly Isaacs enabled Cardiff City Ladies to come away from their long trip to Oakland Park with a share of the spoils with Hollie Wride bagging a brace in the 3-3 draw.

Two early goals from Hannah Mills and Cori Williams gave the Welsh side the advantage, Jess Lewry pulled a quick goal back a neat low finish.

First-half substitute Wride found an equaliser from a free-kick before putting Chichester ahead from the penalty spot, it looks like three points for the home side until Isaacs goal saw Cardiff return home with a point.

It was a cold afternoon in Chichester for the Women’s Premier League match with Cardiff looking somewhat depleted with a lack of staff and players on the sidelines.

The game started slowly with the hosts looking nervous.

Cardiff enjoyed a strong period of possession and quickly took advantage of it to strike a shock lead after only nine minutes of play despite some positive play from Chichester.

The dangerous Williams swung in a free kick from the right and the home defence got in a pickle allowing the poaching Mills to steal in a poke the ball into the back of the net.

Chichester tried to regroup and began to find more of the ball but gave it away cheaply to the opposition and soon found themselves with a mountain to climb when, on the 20-minute mark, Cardiff doubled their advantage.

Again the defence were at sixes and sevens with Williams this time, was on hand to find the finish at the back post with a cross that just beat Sadie Wilson-Blakely at her far post despite the goalkeeper getting just a hand to the ball.

Chichester woke up immediately and within a minute were back in the tie.

Lewry powered through on goal and made no mistake in beating keeper, Estelle Randall, bringing Chichester into the game.

A short time later Lewry thought she had brought Chichester level with a close-range strike only for an offside flag to quickly curtail any celebrations.

By now the impact of Wride had come off the bench to replace Chloe Tucker and that introduction, although forced through injury to the latter, was to prove to be a positive one.

Randall was penalised for a handball outside the box and Wride punished it with a thumping free kick that took a slight deflection en-route to the bottom corner.

The relief around the park was easily heard and the hosts went into the break much the happier with the scores now level.

Second-half and Chichester were now dominating with lots of possession and territory but needing something extra in the final third.

Eventually, the pressure did tell when Cherelle Khassall was shoved aside in the box and a penalty was given by referee Chris White.

Wride stepped up and easily wrong-footed Randall to put Chichester in front for the first time in the game.

Cardiff regrouped and began to find the gaps again in the Chichester defence.

With the hosts throwing caution to the wind in their search for more they were caught out on the break with, still, a quarter of the game left to run.

This time Isaacs rounded off a superb move which went the length the pitch to draw the visitors’ level.

Chichester then brought on both Alex Collighan and Gemma Simmonds as they went in search of a winner and Lewry had a golden chance in injury time but Randall was on hand to make the save to deny her.

The full-time whistle came, a little too soon for the home bench’s liking, and it was a share of the points.

Another positive performance for Chichester to take into next week’s trip to Gillingham in the League followed by the home tie in the Women’s FA Cup against C & K Basildon.